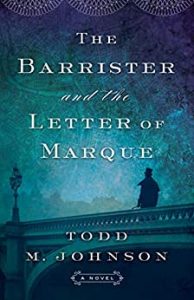 As a barrister in 1818 London, William Snopes has witnessed firsthand the danger of only the wealthy having their voices heard, and he’s a strong advocate who defends the poorer classes against the powerful. That changes the day a struggling heiress, Lady Madeleine Jameson, arrives at his door.

In a last-ditch effort to save her faltering estate, Lady Jameson invested in a merchant brig, the Padget. The ship was granted a rare privilege by the king’s regent: a Letter of Marque authorizing the captain to seize the cargo of French traders operating illegally in the Indian Sea. Yet when the Padget returns to London, her crew is met by soldiers ready to take possession of their goods and arrest the captain for piracy. And the Letter–the sole proof his actions were legal–has mysteriously vanished.

Moved by the lady’s distress, intrigued by the Letter, and goaded by an opposing solicitor, Snopes takes the case. But as he delves deeper into the mystery, he learns that the forces arrayed against Lady Jameson, and now himself, are even more perilous than he’d imagined.

A Regency read with a Dickens-esque overtone, The Barrister and the Letter of Marque by Todd M. Johnson is like nothing I’ve read before. And that’s a good thing.

While most of this story is told from William Snopes’ POV, others (including some of the villains) are used to both increase the suspense and give readers little spoilers throughout. The anticipation is in waiting to find out how William will circumvent them.

Perhaps due to his history, William uses his intelligence to enact justice where warranted. As we see with his history with some of the street children, his heart is in the right place.

Sometimes it’s good to step out of the comfort of our usual reads and discover new (or new to us) authors. I’m glad I took the gamble with The Barrister and the Letter of Marque.