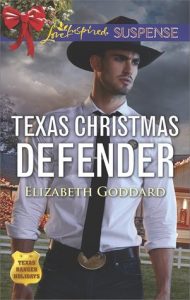 After earning the wrath of her brother, a notorious drug kingpin, Adriana Garcia has been in deep hiding on a remote Texas llama ranch. But when Texas Ranger Brent McCord manages to find her—leading her brother’s men right to her—Adriana discovers she’s a suspect in the murder of a border patrol agent. The handsome, principled ranger, whose life she once saved during a dangerous sting operation, intends to bring her in for questioning…and protection. To prove her innocence, Adriana has to trust Brent with the truth, her heart and her life. Because her brother and his henchman have the ranch surrounded, and Brent’s all that’s keeping this Christmas from turning deadly.

Two years after she helped a Texas Ranger escape from her brother’s Mexican drug cartel, Adriana Garcia comes face to face with him again. In Texas. On a llama farm. Where she’s in hiding.

Brent McCord has not forgotten the beautiful woman who saved his life. When she becomes a suspect in the murder of another Ranger, he is adamant Adriana did not commit the crime. In order to prove it, he goes searching for her and finds her. On Christmas day. But has he led the cartel to her as well?

I loved Adriana. The woman is smart, strong, and determined with a tender heart in spite of her father’s, and now brother’s, involvement in a ruthless cartel. She willingly places herself in harm’s way to protect the people she loves and her faith is strong.

There is a connection between Brent and Adriana that readers know they won’t be able to ignore for long despite their best efforts.

Booby traps, hidden tunnels, bombs, car chases, and gunfights kept me turning the pages to discover whether Adriana will accomplish her mission to shut down the cartel. And, of course, to find out if she gets her man.