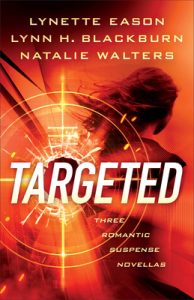 Get ready for triple the excitement, intrigue, and romance with three heart-stopping stories from your favorite romantic suspense authors!

In On the Run, Lynette Eason introduces you to IT Specialist Daria Nevsky, a highly skilled FBI agent with the ability to hack any computer. She must go on the run to find out who wants her dead—and Dr. Ryker Donahue refuses to let her do it alone.

In Deadly Objective, Lynn H. Blackburn throws physical therapist Emily Dixon and Secret Service Agent Liam Harper into an impossible situation. They don’t know why the vice president’s son seems to be in the crosshairs of a killer, but they’ll sacrifice anything to keep him safe.

In Caught in the Crosshairs, Natalie Walters pits former Army PSYOPS officer Ari Blackman against his colleague, CIA officer Claudia Gallegos, when Claudia is implicated in the murder of a Saudi prince. Can he prevent a coup that would put America at risk?

Novellas are often hit and miss for me. I usually like when the characters have some kind of history between them because the developing romance is more believable than the insta-love that two strangers have in a shorter word count. In Targeted, Lynette Eason, Lynn H. Blackburn, and Natalie Walters have the added challenge of ramping up the suspense in each of their novellas in the collection.

While Eason’s characters meet for the first time on the page, her tension and suspense are spot on. She also does a great job of developing the romance and drawing it out more with the epilogue. Blackburn’s characters do have some history between them, and that makes the interactions work between Emily and Liam. The suspense, however, was not up to the author’s usual standards, and I figured out who was behind everything as soon as the person appeared on the page. In the final novella, Walters also has two characters who are just meeting and again, I was okay with the developing romance and there was plenty of action, but it seemed too rushed at times.

Fans of these three authors will enjoy seeing some familiar faces as there are connections to previous books, and the novella setup makes for some quick reading.