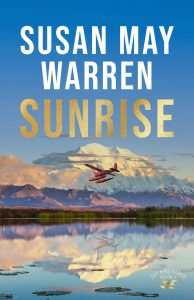 There are several things I know I can count on when I pick up a Susan May Warren book—beautiful settings, heart-pounding moments, strong heroes and heroines who give them a run for their money, and (if it’s not the series finale) an ending that will have me itching for the next book. In Sunrise, Warren takes readers to the Alaskan bush and introduces all of the dangers there from the weather to the wildlife to men up to no good.

This is a good series finale that introduces many of the people we will most likely see again through the remaining books (I hope so, anyway). Echo is a truly impressive woman who knows Alaska and endures it year after year. Dodge is not without his faults—which he readily owns—but he’s someone you will root for.

While there were times I just wanted to lock Dodge and Echo in a room and let them hash out their past and present feelings, the journey was one worth taking. And now I’m anxiously awaiting to meet Dodge’s brothers.