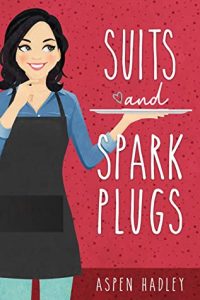 Liv Phelps is on a mission. Get a degree, stay independent, save her family, and start a new life far from the small town where she was raised. Men, love, and emotion have no place in her plans. However, the universe has a different idea of what Liv needs, and when dashing Blaine Harris enters the diner where she’s working, she decides that maybe she should give him a chance. Blaine is world’s away from anyone she’s ever known and introduces her to things she’s long dreamed about. But when he forces her to get her beat-down car seen by the local mechanic, a wrench is thrown into the works.

Connor Hunt, resident of her same small town, has been at the very top of Liv’s ‘do not disturb’ list ever since she had a front row seat to watching him create his terrible reputation. A magician with cars, he agrees to fix Liv’s in exchange for her willingness to clean his mechanic shop once a week. Although hesitant, a deal is struck. Liv never could have imagined how one simple ‘yes’ would throw her life into the type of tailspin that she’d always planned to avoid.

Although I’ve heard of Aspen Hadley and seen some of her books, Suits and Spark Plugs is the first one I’ve read. And it did not disappoint.

Liv is independent and determined but she also has strong opinions—ones based on the past and not the present—about the town mechanic. From the first time Connor walks on the page, readers can see the good guy he is (although he’s not without his own hurts and flaws).

This book leans toward chick lit with some new adult thrown in as Liv is finding her place or, more accurately, chasing her place. There is plenty of romance but Liv’s friendship with Kelly and family dynamics give the book more depth, and I enjoyed the sometimes witty and sometimes real (the truth hurts kind of real) conversations between Kelly, Liv, and Connor. I will be reading more from this author.