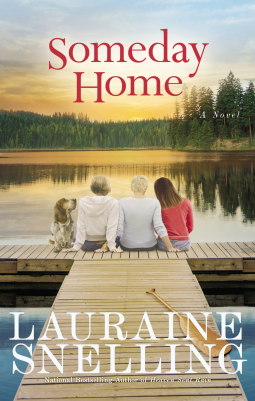 Despite living close to her grown boys and their families, Lynn struggles with loneliness in her large home after the death of her husband two years ago. Her house is where her family gathers, where the grandkids come to spend time with G’ma but when she’s by herself, the emptiness weighs on her. After a twenty-five year marriage, several of those years spent remaking herself into the woman her husband wants her to be, Angela is shocked when he asks for a divorce. Judith has devoted her life to caring for her family. Her father promised to take care of her in his death, but his idea of caring for her is not what Judith had imagined. God brings these three women together in a house sharing venture on a beautiful lake. As each woman discovers herself, she must also release her grip on the past. Can three women who have lived half a lifetime survive together under the same roof?

While the characters in this book where a little older than me (okay, one of them was only five years older), I could relate to their experiences. I share a house with other people. There have been disagreements as well as celebrations. It’s bound to happen when adults who live separate lives all come together. Although, we never had some of the adventures that Lynn, Angela and Judith have in this book. I mean, I’ve never really had a dream to raise chickens but I would love to live on a lake where I could take a canoe out at any time. And the back deck of this house is a dream. While these three women encourage each other to chase their dreams, they also challenge each other in their spiritual walks (especially in the area of forgiveness). Each one of them has to let go of wrongs done to them, hurts in their past. Every once in a while it’s nice to veer from romantic fiction and live a day-to-day life with characters in a book, and this one fits the bill.