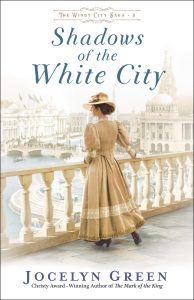 The one thing Sylvie Townsend wants most is what she feared she was destined never to have–a family of her own. But taking in Polish immigrant Rose Dabrowski to raise and love quells those fears–until seventeen-year-old Rose goes missing at the World’s Fair, and Sylvie’s world unravels.

Brushed off by the authorities, Sylvie turns to her boarder, Kristof Bartok, for help. He is Rose’s violin instructor and the concertmaster for the Columbian Exposition Orchestra, and his language skills are vital to helping Sylvie navigate the immigrant communities where their search leads.

From the glittering architecture of the fair to the dark houses of Chicago’s poorest neighborhoods, they’re taken on a search that points to Rose’s long-lost family. Is Sylvie willing to let the girl go? And as Kristof and Sylvie grow closer, can she reconcile her craving for control with her yearning to belong? 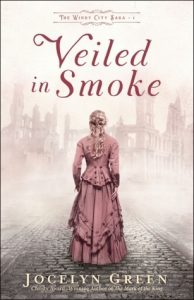 For everyone who read Veiled in Smoke and wanted Sylvie Townsend to get her own story, Shadows of the White City is for you. And for those of you who have not read it, with two decades between the books, this story is for you too (but do yourself a favor and read that first book).

Jocelyn Green takes several story lines, saturates them with vivid setting and description of the Chicago World Fair, the plight of the lower classes, and the revitalization of the great city, and then adds a mystery on top of it all. Sylvie has spent years raising Rose, but the girl has grown into a young woman, and longs to discover more about her family and heritage. When Rose disappears, Sylvie embarks on a journey to ensure her daughter is safe.

Family plays a large role in this story (with both Sylvie and Kristof) and the romance added some sweet moments in the race to find Rose.

I love that Green gave us this book with a more mature hero and heroine than we read in most fiction today. Their experiences as well as their understanding of the world and people make Shadows of the White City one for the keeper shelf—right there next to that first book in the series.