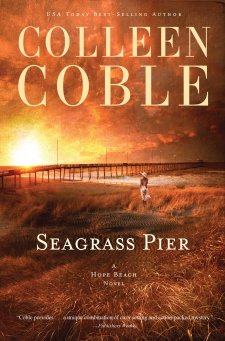 Elin Summerall is blessed and cursed. She’s blessed to have been the successful recipient of a heart transplant and cursed because that transplant came with some memories. Memories of how the woman whose heart she now carries with her died at the hands of a killer. When the killer seems to set his sights on her, her four-year-old daughter, and her mother who is suffering from dimensia, Elin decided to move her family to a place she bought in Hope Island, Virginia.

Now she has to contend with FBI agent Marc Everton. Marc and Elin have some history and when Marc finds out what Elin hid from her, he is angry. He’s also trying to find out who murdered his partner and it has led him right to Elin’s door. As the two of them try to figure out who murdered her donor. As the two of them are thrown together, they cannot deny the attraction they feel for each other, but are they willing to put their past where it belongs and move into a future before someone is hurt, or worse?

There was a lot going on in this book. Some side plots that could have been left out, several murder suspects, and many characters to keep track of. I had an inkling of who the murder was as soon as he showed up in the book, but wasn’t one hundred percent certain until the end. That kept the pages turning.

If you enjoy suspenseful mysteries with romance thrown in there, Coble delivers. This is the third novel in the Hope Beach collection, but it is a stand alone. While the characters from the first book make brief appearances, the reader doesn’t feel like they are missing out on anything because they haven’t read the first two books.

****BookLook Bloggers and Thomas Nelson Publishers provided me with a free copy of this book in exchange for an honest and fair review.