I may have been late to the Enchanted Events party but my wait was much shorter for book two. And oh, boy, was it worth it!! 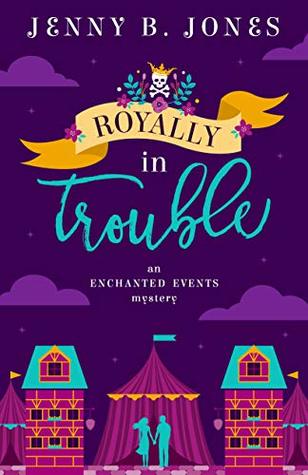 If an ex-popstar-turned-event planner can’t find a Ren-faire killer, she may not survive the final act.

As a former member of a popular girl-band, Paisley Sutton knows what it means to be in the spotlight. So after she takes on an event- planning gig for the new Sugar Creek Renaissance faire, she’s counting on a smooth opening night. But when one of the cast is murdered, Paisley knows her event has gone lethally off-script.

When her old flame Beau is named the prime suspect, Paisley enlists the help of her trigger-happy ex-CIA grandmother and aunt. As she tries to keep the faire alive and fights off her matchmaking family, she uncovers secrets that might just get her killed. Can Paisley shine a light on the killer in time, or will the faire be her final curtain call?

Royally in Trouble is the second book in the lively Enchanted Events cozy mystery series with a dash of romance. If you like engaging characters, small-town intrigue, and laugh-out-loud moments, then you’ll love Jenny B. Jones’ Renaissance romp.

Paisley Sutton is back with the rest of the memorable Sugar Creek residents. When a man is murdered, and the renaissance faire Paisley and her staff are in charge of, she refuses to believe the main suspect is guilty. Beau may be many things, but he is not a killer.

This cozy mystery had me laughing. A gun-toting, ex-CIA grandmother and aunt who host a sexy book club (and have plenty to say about said books) and speak their crazy, gotta-love-em minds provide plenty of fodder. There’s also some blood pumping-pulse pounding action, and a mystery that kept me guessing until the final curtain call.

And then there’s Beau. Oh, this guy who kissed Paisley like he meant it and who says things that leave her (and us readers) swooning is one to hang on to.

Jenny B. Jones’ second installment in the Enchanted Events series is even better than the first. I’m looking forward to more time in Sugar Creek with this crew!