Once in a while I like to expand my reading to something that I wouldn’t normally read. My go-to reads are contemporary romance followed closely by YA. Lately, I’ve been throwing a little historical fiction in there. And my latest read is something I don’t tend to read much of: Cowboy fiction. I’ve heard there’s a large following for this genre and after reading Mary Connealy’s book, I can see the draw. 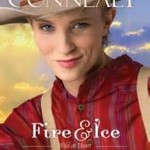 Homesteader Bailey Wilde is determined to make a success of her ranch and if that means keeping Gage Coulter out of the canyon land he owns but has to cross her property to get to, so be it. She’s done harder things, like fight in the Civil War. Then Gage finds another way into the canyon, and Bailey’s left scrambling to figure out what to do with her own herd of cattle.

When Gage discovers the true identity of Bailey Wilde, he’s shocked and…interested. The woman is tough as nails, smart, and as hard a worker as any of his ranch hands. But her refusal to let him move his cattle across her property to get to his prime winter grazing spot in the canyon, his patience wears thin. He’s just as smart as the pretty blonde woman, and he will get his herd onto his property with or without her cooperation.

After a long and lonely winter, Gage shows back up on Bailey’s doorstep with a proposal. One that both intrigues and terrifies her. Can two stubborn-headed, independent people figure out that together is better?

Bailey Wilde’s no-nonsense approach to life might keep her away from the townspeople, but she’s willing to work for her dreams and prove herself worthy of her homestead. But she’s also lonely, especially when both of her sisters move away with their husbands.
Gage Coulter is another person who values hard work and is willing to break his back along with his crew to get the job done. What he doesn’t count on is an attraction to Bailey, something he’s never dealt with before when it came to a woman.

Throw in a visit for Gage’s mother, and what readers are left with is a bit of humor and a lot of trouble.

****Bethany House Publishers provided me with a complimentary copy of this book in exchange for an honest and fair review. All opinions expressed are my own.