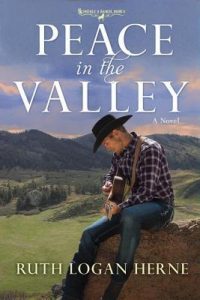 If you’ve been following Ruth Logan Herne’s Stafford brothers throughout the Double S Ranch series, Peace in the Valley offers a satisfying conclusion to the series. And if you haven’t been following, you won’t be lost if you pick up the newest release.

While Trey Walker Stafford and Lucy Carlton’s lives appear at opposite ends of the spectrum when they first meet, the reader (and the characters) soon discover they have much more in common. They are both searching for love and acceptance. Trey’s career in Nashville has given him fame, notoriety, and money but he feels something is missing. Lucy’s life has been filled with one disappointment followed by another and she’s struggling to provide for her family.

And speaking of family, Lucy’s kids are adorable. I loved that the author included kids in all of the books in this series. Family is a huge thread that weaves through each of these books.

As a read who currently lives in Nashville (and no, I’m not trying to make it in the music scene) but once lived close to the central Washington setting of the Stafford ranch, I appreciated the juxtaposition of the two areas. Both have their own draw and beauty but there is something majestic about the Washington state fields and mountains.

Trey struggles with fears in his sacrifice, Lucy wrestles with trusting in a future that’s too good to be true, and two of Lucy’s brood struggle with their own issues. But it’s family who gives us the courage to press on despite the uphill battle, and Ruth Logan Herne is one of the best out there when it comes to drawing the reader into the family fold.

How about you? Tell me in the comments whether you live near or far from family.

Tyndale House Publishers provided me with a complimentary copy of this book. I receive complimentary books for review from publishers, publicists, and/or authors, including Netgalley. I am not required to write positive reviews. The opinions I have expressed are my own. I am disclosing this in accordance with the Federal Trade Commission’s 16 CFR, Part 255.

Other books in the series:

Back in the Saddle   Home on the Range

Ruth Logan Herne has more than a million books in print, including eighteen Love Inspired 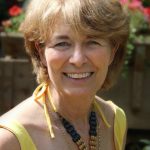 contemporary novels and Back in the Saddle, Book 1 in the Double S Ranch series. Ruth is a founding member of Seekerville, a popular writing-collective blog. A country girl who loves the big city, Ruth and her husband live on a farm in upstate New York.