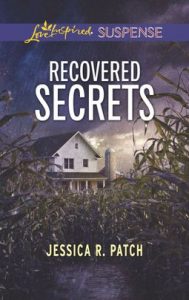 A blank memory. A new life.

But her borrowed time just ran out

Two years after Grace Thackery washed up on a small-town Mississippi riverbank, she has the first clue about the life she doesn’t remember: someone wants her dead. And while search-and-rescue director Hollis Montgomery’s determined to protect her, the secrets of her past are darker than they expected. Can the bond between Grace and Hollis survive her true identity…and an assassin?

With flooding, memory loss, and search and rescue, you’d think this book had plenty to keep you busy, wouldn’t you? But Jessica R. Patch kicks it into even higher gear with a heroine I will describe as a female Jason Bourne with a conscience.

Thanks to retrograde amnesia, Grace Thackery doesn’t remember anything before the last two years of her life. Her quiet life in little Cottonwood, Mississippi is upended when people start showing up trying to harm her. And she’s got some serious skills that kick in when she’s in danger. But where did she learn them? Is she a superhero or a supervillain?

The friendship between Grace and Hollister (the man who found Grace and is now her best friend), their bantering, Hollister’s encouragement and pride in Grace’s skills, and his assurance that no matter her past, she’s a new creature in her faith are all spot-on.

A strong female lead that can take on her attackers, a town slowly going underwater, and a plethora of people who want Grace dead had me zipping through Recovered Secrets from beginning to end. This is Patch’s best book yet.