Natchez, MS; 1791
Anxious for his brothers to join him on the rugged frontier along the Mississippi River, Connor O’Shea has no choice but to indenture himself as a carpenter in exchange for their passage from Ireland. But when he’s sold to Isabella Bartholomew of Breeze Hill Plantation, Connor fears he’ll repeat past mistakes and vows not to be tempted by the lovely lady.

The responsibilities of running Breeze Hill have fallen on Isabella’s shoulders after her brother was found dead in the swamps along the Natchez Trace and a suspicious fire devastated their crops, almost destroyed their home, and left her father seriously injured. Even with Connor’s help, Isabella fears she’ll lose her family’s plantation. Despite her growing feelings for the handsome Irish carpenter, she seriously considers accepting her wealthy and influential neighbor’s proposal of marriage.

Soon, though, Connor realizes someone is out to eliminate the Bartholomew family. Can he set aside his own feelings to keep Isabella safe?

Before moving to Tennessee, I had never heard of the Natchez Trace. Now, I can get to it in about twenty minutes. One day, I’d like to drive the Trace all the way to Natchez, Mississippi. Until then, I’m enjoying the beauty of the seasons along the Tennessee portion of this passage.

In The Promise of Breeze Hill, Pam Hillman brings characters who live along the Mississippi portion of the trace to life. Readers get to experience the danger—both from nature and from man—of traveling along this trail in the late 1700s.

Connor O’Shea, and indentured servant to Breeze Hill, knows how to push Isabella Bartholomew’s buttons and doesn’t hesitate to do so. His teasing makes him even more likeble after readers learn he’s indenturing himself in order to bring his brothers to the colonies from Ireland. Isabella is strong and determined (sometimes to the point of stubbornness). 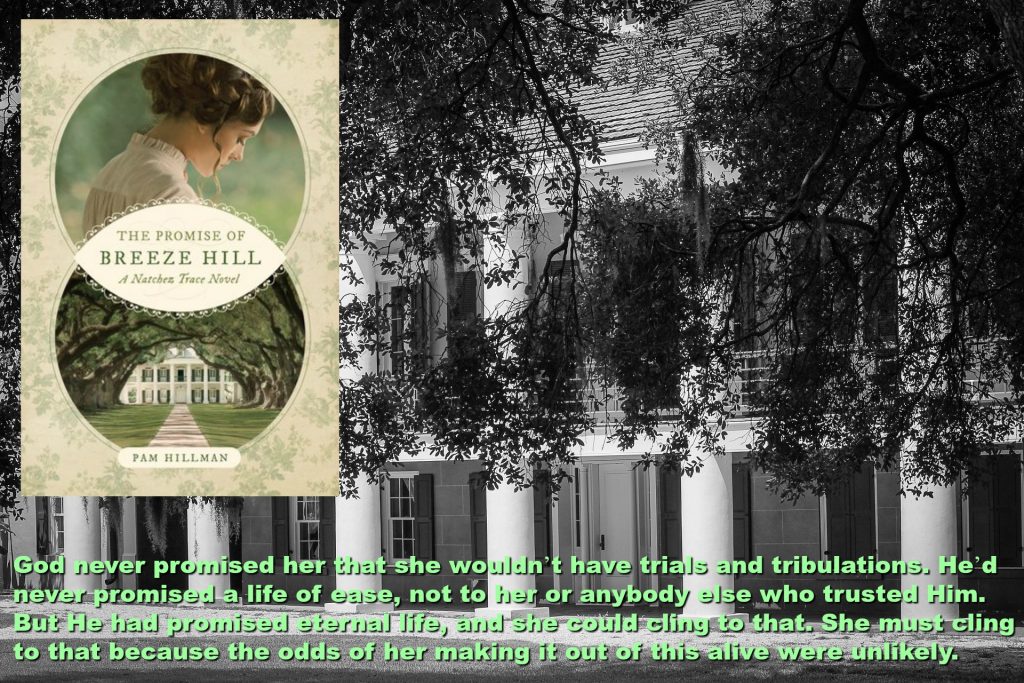 Both of these characters must come to terms with past events. Connor’s poor judgement in his youth separated him from his family. Isabella’s problems are more recent with her brother’s death and the fire that destroyed a part of her home and injured her family.

There is plenty of intrigue as the residents of Breeze Hill try to unravel the mystery of who wants to hurt the family—and why. Add to it the criminals who attack travelers along the Natchez Trace that runs past Breeze Hill, the line of suitors vying for Isabella’s hand in marriage, and the growing chemistry and attraction between her and Connor, and this book kept me reading late into the wee hours of the morning as events unfolded and the truth was revealed.