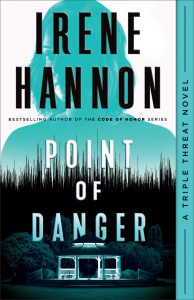 Radio talk show host Eve Reilly is used to backlash from her pot-stirring on-air commentary and interviews, but now it seems a disgruntled listener is resorting to more than angry words to express their displeasure. When a suspicious package arrives on her doorstep, Eve turns to law enforcement for help.

But unless he can track down her foe, fast, the gutsy woman who is willing to take risks for what she believes–and who is swiftly winning his heart–may not survive.

Bestselling author and three-time RITA Award winner Irene Hannon is back with a heart-stopping new series that will have you turning pages well into the night.

For those who enjoy reading about strong women who speak their minds and don’t cower after threatened, Point of Danger by Irene Hannon is a must read.

Eve Reilly’s radio talk show stirs up opinions on both sides of whatever issues she’s discussing, but she makes no apology for her strong stances. When the threats escalate to include more than words, Brent Lange is given the case.

It did take me a while to get everyone straight in how they fit in with the story with the multiple points of view in this book. While the story centers on Eve and Brent, Hannon’s inclusion of secondary characters kept me guessing of how they fit in. Were they the culprit or not? And that question was not answered until near the end of the book.

I did like how Eve listened and encourage Brent while never pushing him. And the fans of Hannon’s books will recognize some of the names mentioned but those who haven’t won’t feel lost. Overall, a quick read with some good action, better romance, and an ending that had my heart racing.