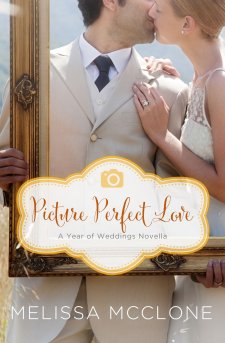 The seventh book (wow, we’re more than halfway through this collection already) in the A Year of Weddings Novella series, the title gives away which industry one of these characters. Picture Perfect Love was an introduction of a new-to-me author, Melissa McClone.

In the past two years, Jenna Harrison has overcome several obstacles and now is a successful and sought after wedding photographer. Despite being humiliated in public and dump during her own wedding rehearsal, Jenna strives to make memories of every couple’s special day. When Ashton Vance’s sister admits to something he’d blamed Jenna for (publicly, no less), his world is turned on it’s side. His anger that day two years ago cost him more than he knew. And an apology is long overdue. But Jenna wants nothing to do with the man who broke her heart, the man she is still trying to get over. Why won’t he leave her alone? He didn’t trust her when she’d told him the truth before, why would things have changed? The more the two spend time together, the more their old feelings for each other (and even some new ones) are brought to the surface. Will Ashton prove he’s changed, that Jenna is the woman he’ll stand beside no matter what? Or will Jenna have to give him up again?

This short novella was a fun read with a crazy puppy, a bunch of teenagers on a ropes course, a spoiled princess (Ashton’s sister), and two people trying to find their way. The focus on Jenna’s renewed strength and faith over the past two years are evidenced not only to the reader, but Ashton as well. He sees new confidence in her and he likes this new Jenna. Maybe even more than the woman he was going to marry. And while Jenna has grown over the past two years, she still has a grasp on the past. Especially the wrong that was done to her while she was standing at the front of a church with Ashton beside her and friends and family in the seats watching them. The readers know that in the end the couples will be together, the fun of reading these stories is the journey before the destination.

***Booklook Bloggers and Zondervan Fiction provided me with a free copy of this book in exchange for an honest and fair review. All opinions expressed are my own.