My absolute favorite Jane Austen book is Persuasion. There’s just something about a love that lasts through years of separation. So, of course,  was thrilled to read this modern-day retelling. 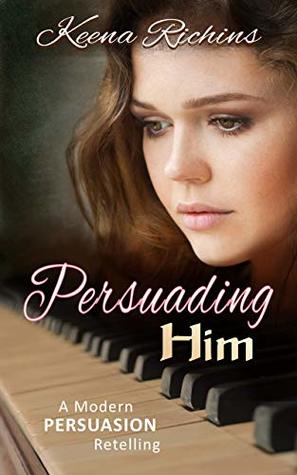 At seventeen, Anne found the love of her life in an ambitious, yet troubled ex-foster boy. However, her wealthy family persuaded her to keep on her path to a prestigious career instead of running away with a boy with no future.

Eight years later, she finds herself with no career, little money, and a heart still pining for that ex-foster boy. When she accidentally runs into him–now handsome, rich, and working for the prestigious Pemberley Estates Corporation–she discovers he still hasn’t forgiven her yet. How in the world is she going to convince him to give her a second chance?

“Persuading Him” is a stand-alone, clean/sweet, second-chance romance with a guaranteed happily ever after, plus with some other Austen characters sprinkled in. It tells the tale completely from Anne’s side. Check out the companion novel for Rick’s side.

Persuading Him follows the original well. Maybe a little too well because I was over Anne’s whiny younger sister Mary well before the book shifted out of that setting. Yes, Mary is the same way in Austen’s version—selfish and attention-seeking. But for some reason, it was more annoying in Keena Richins’ version.

Once Anne moved on from visiting her sister and carrying for her nephews, things got much better. Now Anne has more pressing issues to focus on and is beginning to stand up for herself. I would have loved to read more interaction between Rick and Anne (but again, Richins stays true to Austen in the interactions of the two main characters).

Not to worry, though, Richins has also written Persuading Her which is the same story from Rick’s perspective. Since I’ve always wondered what went on in Wentworth’s head, I will definitely be delving into this one soon.