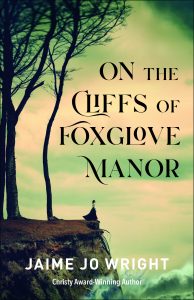 1885.
Adria Fontaine has been sent to recover goods her father pirated on the Great Lakes during the war. But when she arrives at Foxglove Manor–a stone house on a cliff overlooking Lake Superior–Adria senses wickedness hovering over the property. The mistress of Foxglove is an eccentric and seemingly cruel old woman who has filled her house with dangerous secrets, ones that may cost Adria her life.

Present day.
Kailey Gibson is a new nurse’s aide at a senior home in a renovated old stone manor. Kidnapped as a child, she has nothing but locked-up memories of secrets and death, overshadowed by the chilling promise from her abductors that they would return. When the residents of Foxglove start sharing stories of whispers in the night, hidden treasure, and a love willing to kill, it becomes clear this home is far from a haven. She’ll have to risk it all to banish the past’s demons, including her own.

Wow, Jaime Jo Wright has done it again. With its relatable characters, interesting history, perfect setting, and eerie undertones, On the Cliffs of Foxglove Manor is a book you will simultaneously want to set aside to digest everything that’s happening and not want to put down to get to the mystery.

Let’s just start with Adria and Kailey—two women living more than a century apart who are embroiled in the mystery surrounding Foxglove Manor. They both have such purpose to this story and each of their threads enhances the other ones. Even the people who surround them are there for a purpose. And the romance? Subtle at first but written in such a way that it builds with the story, so the tension is even more taut.

And I cannot go without mentioning Kailey’s brother Jude. Wright described him and his challenges in such a way that readers see his strengths and the way Kailey loves him instead of his challenges.

There is so much more to this book that I could talk about, but I also don’t want to give anything away. You’ll have to pick up a coy and read it for your self to discover the brilliance that is unique to Wright’s books.