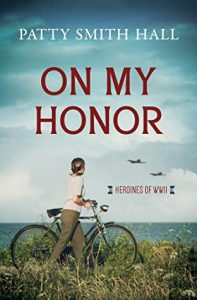 In On My Honor, Patty Smith Hall takes readers to the Outer Banks of North Carolina with a girl scout troop, a mysterious stranger, and a woman determined to do her part during World War II.

I appreciated this peek into American history that I knew nothing about before reading this book. The book is well researched and the addition of the girl scouts (and the POV of Bella who is thirteen) add a something new to the popular WWII fiction books out there.

Ginny and Bella are sisters who have grown apart but still respect each other (even when they don’t tell each other so). There are plenty of questions around the Englishman who washed up on shore and perhaps Ginny’s opinion of (and the following romance with) him maybe happen too quickly.

This latest installment in the Heroines of WWII series from Barbour is an entertaining read that introduces some little-known (at least for me) history and is well worth the read.