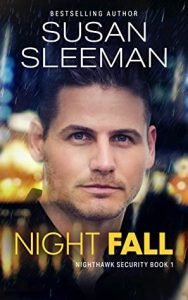 She faces dangerous situations all the time…

Olympic downhill skier, Harper Young, knows what it’s like to look danger in the face. After all, she does it every time she races down a ski slope. She’s fine with that danger and even excels under the pressure, winning Olympic gold. And as a governor’s daughter, she’s familiar with receiving threats from the general public. But when a stalker turns his sights on Harper, she possesses zero skills to protect herself.

But she has no idea what lurks in the shadows.

Former Navy SEAL and ATF Agent, Aiden Byrd of Nighthawk Security is well versed in protection skills and knows the dangers she faces. Problem is, there’s an instant attraction between Aiden and Harper, and Aiden has to fight hard to remain professional. As the stalker grows bolder and tries to end Harper’s life, Aiden’s only hope in keeping her safe is to deny his feelings. Something that borders on impossible.

I have been a Susan Sleeman fan for a while now, especially the way she brings characters from previous series into the current one. Night Fall (yes, I’m behind but there’s just enough time in the day!), book one in the Nighthawk Security series follows that pattern.

The Byrd brothers have left their former careers in different areas of law enforcement to build their own security business. When they take on protection detail for an Olympian being stalked, there is an immediate attraction between her and the eldest Byrd. But protecting Harper is Aiden’s number one goal.

Sleeman adds plenty of blind twists and turns while giving readers an education in investigative procedures. I’m looking forward to spending more time with these brothers as they grow their business (and the upside of being behind in the series is that I can jump right into book two).