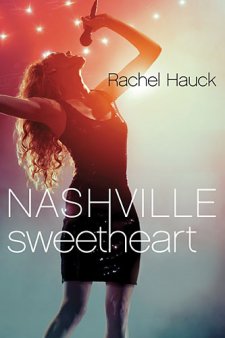 Sometimes when I’m reviewing books I seem to run into a theme. Recently I was reading a couple of mysteries in a row. This month is seems to be books based in Nashville. The books are very different from each other (the last one I reviewed was a historical romance and the one I’m reviewing today is contemporary). Now, I’m not complaining. As a transplant to Nashville, I love being here. I love this city. It’s a large city that doesn’t feel like a large city. In Nashville Sweetheart, Rachel Hauck gives readers a glimpse into Nashville and the country music scene.

Aubrey James is a country music diva and she knows it. She has been in the music industry for years, but has avoided doing media interviews. Her parents were Gospel music pioneers who died tragically in a car accident when she was a teenager and, at thirty, she is still grieving their loss. Her crazy schedule has caused her to need a break over the summer, but a disgruntled music director, a new record label president, and a fiancé are making her life even more stressful. Aubrey James agrees to do a local interview. Scott Vaughn works for a local television program, Inside NashVegas, and it tapped to do the interview with Aubrey. While interviewing her over the course of a month, Scott sees Aubrey’s tenderness and sincerity, something not many people get to see because Aubrey James tries to keep her private life private.

The book is a little older so there are some dated references in there is you know Nashville (some places that have changed names or are no longer around), but that doesn’t detract from the story. I wasn’t sure what to think of Aubrey James at first but as I got to know her as she told her story, she became more likable and you want her to succeed. This one is definitely another winner by Rachel Hauck.