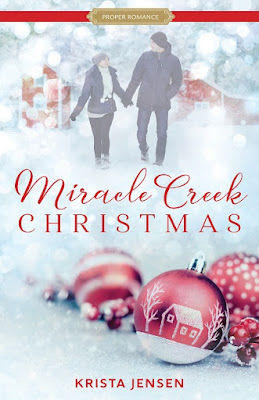 When Riley Madigan moves to the sleepy mountain town of Miracle Creek, she hopes her new job as a high school art teacher will help her mend her recently broken heart. A little peace and quiet would be a gift this Christmas season. The last thing on her mind is love.

Former firefighter Mark Rivers has spent the last year recovering from burns sustained during a rescue operation. He’s been trying to piece his life back together but still struggles both emotionally and psychologically. When he meets Riley, he finally sees something that might bring some light back into his life.

When Mark asks Riley to work on a special nativity project, he finds himself falling for her quirky, unaffected ways. Riley doesn’t seem bothered by his scars, but is her affection for him real, or is this just another act of charity? One thing’s for certain, in a small town that views Mark as a fragile hero, it’s hard to pursue a relationship without everyone in his business. And although Riley has sincere feelings for Mark, is she ready to risk her heart?

Broken hearts and lives are mended as the town of Miracle Creek comes together to celebrate a Christmas to remember.

1) Miracle Creek is a fictional town based on the factual town of Cashmere, Washington and its nearby Icicle Creek and Icicle Creek Bridge. Check it out!

2) I was in bed for most of the duration of writing Miracle Creek Christmas, through two back surgeries leapfrogged by two shoulder surgeries over a 3-year span. So although I live within two hours of Wenatchee Valley, I couldn’t visit to research it myself for some details. Fortunately, I’ve visited the area multiple times since I was a little girl, and I had a couple of friends who live there that I reached out to. And I used Google Maps a lot. And Miracle Creek was born!

3) The Aplets & Cotlets fruit candy factory is a landmark in Cashmere, and the scene where Riley and Mark consider taking the factory tour was edited out. The factory is now closed due to COVID-era economics. 🙁

4) I began writing Miracle Creek Christmas after the 2015 wildfires that raged across Washington State, spreading firefighters so thinly, fighters from neighboring states were called on to help. The Chelan Complex Fire was an actual event, though Mark and Jay’s experience with the boys was fictional.

5) Riley is named after my beautiful niece, Riley Anglesey, who is a freshman this year at BYU.

6) Miracle Creek Christmas was originally titled, “Hold on Forever” after the song by Rob Thomas, who I adore. The song so perfectly expresses the way Riley and Mark come to feel about each other–“Lay down all your troubles end to end, they could reach up to the stars. So many roads, you don’t know where you’ve been, but you still know who you are . . . Just fall apart if you need to. I’m here and I won’t leave you now. Don’t look down. Hold on forever…” Such a great song for these two.

7) I fashioned Cal Rivers after the iconic Mr. Paul Newman. I had so much fun writing the scenes between Mark and his dad! The sass from those boys!

8) The alpine town of Leavenworth is indeed one of my favorite places to visit and the depiction was no exaggeration! I love every painted mural, lederhosen, oom-pah band, bratwurst, and felt cap. And don’t forget the bollen!

9) The character of Gus was fashioned after one of my husband’s best friends. Everyone needs a Gus.

10) Thirty years ago, my husband and I were given an antique Gustav Stickley Craftsman-style rocking chair as a wedding present. And a star was born. I have rocked all my babies in it. Rock on.

BONUS) For several weeks I volunteered to pick up a sweet woman I barely knew from her dialysis appointment because her husband would often travel for work. Her name is Carmen, and she’s become very dear to me. Sometimes authors take a few bits and pieces from people we know or observe to create a new character–like Gus and Cal. But with Carmen, I wrote Carmen. She is her. And I couldn’t even change her name. She is a wonder and an inspiration to me. And fortunately, she was overjoyed and humbled to play a part in this story! A few months before Miracle Creek Christmas was released, Carmen received a successful kidney transplant and no longer has to endure dialysis! She remains a dear angel in my life. 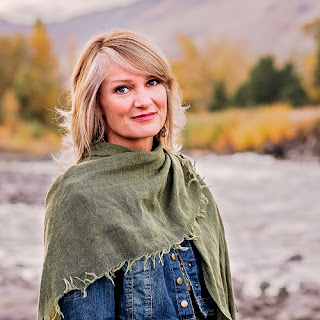 Award-winning author Krista Jensen works and plays in the Pacific Northwest with her little black dog and anyone else who wants to tag along. When she’s not exploring the outdoors, she can likely be found with her laptop, a pretty spiral notebook and Pilot Precise V7, writing about love, triumph, and really great kisses.

Either that or she’s switching laundry wondering who keeps wearing all these clothes.
(It’s her.)