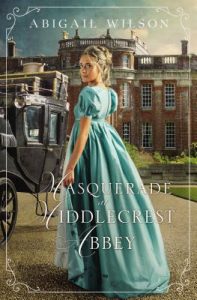 In this new Regency romance, a young unwed mother must protect her heart from the charms of her convenient new husband, Lord Torrington. She is not, however, prepared to protect her life.

When the widowed Lord Torrington agreed to spy for the crown, he never planned to impersonate a highwayman, let alone rob the wrong carriage. Stranded on the road with an unconscious young woman, he is forced to propose marriage to protect his identity and her reputation, as well as his dangerous mission.

Trapped not only by her duty to her country but also by her limited options as an unwed mother, Miss Elizabeth Cantrell and her infant son are whisked away to Middlecrest Abbey by none other than the elder brother of her son’s absent father. There she is met by Torrington’s beautiful grown daughters, a vicious murder, and an urgent hunt for the missing intelligence that could turn the war with France. Meanwhile she must convince everyone that her marriage is a genuine love match if her new husband has any hope of uncovering the enemy.

Determined to keep her son’s true identity a secret, Elizabeth will need to remain one step ahead of her fragile heart, her uncertain future, and the relentless fiend bent on her new family’s ruin.

Abigail Wilson outdoes herself with each new book release. Masquerade at Middlecrest Abbey is marriage of convenience wrapped in mystery wrapped in romance. With all of that going on, it might be easy to drop the ball on one of the story threads, but Wilson balances them all and kept me guessing until the end of the book.

While their first meeting is rather unconventional and throws them right into their charade, a friendship develops between Elizabeth and Torrington. Some of my favorite parts of this book were the quiet moments when these two talk—both about themselves and about their investigation. Torrington doesn’t dismiss Elizabeth because she’s a woman. He listens to and leans on her. And through those conversations, that building friendship and trust, romances sparks.

Each book Wilson releases is my new favorite, and I look forward to reading many more fantastic stories from her.