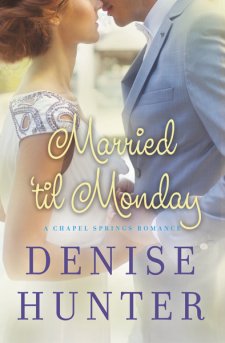 If you’ve been reading the Chapel Springs series, you are at least a little bit away or Ryan McKinley’s history with his ex-wife. The fourth and final installment in the series not only gives you the complete picture of what happened in Ryan’s marriage, it also introduces you to some new people who will be in Hunter’s next series (the first book in the Summer Harbor series is currently slated for a September release).

Ryan McKinley has spent three years trying to get over his ex-wife, and his family has not been shy in their opinions either. Moving into her dream house had been a mistake. When he receives a call from Abby’s parents about an anniversary party, he realizes that she hasn’t told them about the divorce. Deciding this was a sign that he should reconcile with her, he shows up at her door to make the drive with Abby and spend a couple of days with her parents. Abby has moved on with her life after Ryan. The last year of their marriage was filled with arguments and fights. At one time Ryan had loved her but then he seemed to resent her. But spending time with him—in close quarters no less—is playing havoc with her emotions as well as her resolve. Why does he insist on wedging himself into her trip, her family, and her life? Why can’t her heart let him go?

While Ryan states several times during the book it took two people to break up their marriage, Abby’s distorted view of how she should be treated is the crux. Her family dynamic made me both angry and sad. With the scars from her past, her view on relationships is skewed. But Ryan is set on convincing her he’s worth the risk. I enjoyed the first book in this series immensely, but Married ‘til Monday was my favorite as I walked the road to healing with Abby and Ryan.

Bestselling novelist Denise Hunter has received the Holt Medallion Award, Reader’s Choice Award, Foreword Book of the Year Award, and is a RITA finalist. She lives in Indiana with her husband and their three sons.