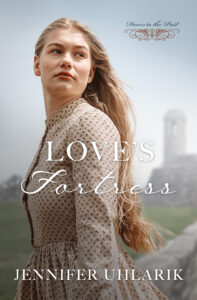 Walk through Doors to the Past via a series of historical stories of romance and adventure.

When Dani Sango’s art forger father passes away, Dani inherits his home. Among his effects is a book of Native American drawings, which leads her to seek the help of museum curator Brad Osgood to decipher the ledger art. Why would her father have this book? Is it just another forgery?

Brad Osgood’s four-year-old niece, Brynn, needs a safe home, and Brad longs to provide it. The last thing he needs is more drama, especially from a forger’s daughter. But when the two meet “accidentally” at St. Augustine’s 350-year-old Spanish fort, Castillo de San Marcos, he can’t refuse the intriguing woman.

Broken Bow is among seventy-three Plains Indians transported to Florida in 1875 for incarceration at ancient Fort Marion. Sally Jo Harris and Luke Worthing dream of serving God on a foreign mission field, but when the Indians arrive in St. Augustine, God changes their plans. Then when friendship develops between Sally Jo and Broken Bow and false accusations fly, it could cost them their lives.

Can Dani discover how Broken Bow and Sally Jo’s story ends and how it impacted her father’s life?

A couple chapters into Love’s Fortress by Jennifer Uhlarik, I was certain the modern-day timeline was the one I’d enjoy the most in the book. So, imagine my surprise when I reached the end of the book and Broken Bow was the character that most impacted me.

The author wrote both timelines in a way that connected so well throughout the book. As Dani and Brad try to figure out the connection to Dani’s father and the artwork, they each face their own hardships. The same with Sally Jo, Luke, and Broken Bow. I loved how Sally Jo and Luke saw beyond Broken Bow’s skin color. They saw his heart. They formed a bond of friendship, and they championed each other when life threw darts their way.

All the characters in Love’s Fortress are well-rounded, and I felt an emotional connection to each of them throughout this story. This is a story of healing throughout, and the world can always use more of that. 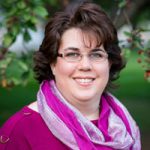 Jennifer Uhlarik discovered the western genre as a preteen, when she swiped the only “horse” book she found on her older brother’s bookshelf. A new love was born. Across the next ten years, she devoured Louis L’Amour westerns and fell in love with the genre. In college at the University of Tampa, she began penning her own story of the Old West. Armed with a BA in writing, she has won five writing competitions and was a finalist in two others. In addition to writing, she has held jobs as a private business owner, a schoolteacher, a marketing director, and her favorite—a full-time homemaker. Jennifer is active in American Christian Fiction Writers and is a lifetime member of the Florida Writers Association. She lives near Tampa, Florida, with her husband, teenage son, and four fur children.

Florida has been my home since I was ten, and I’ve visited the city of St. Augustine several times in my many years here. There, I stumbled across the fact that the Castillo de San Marcos, the town’s 350-year-old Spanish fort, was home to several groups of Native Americans in the 1800s. Ever since learning this fact, I’ve considered writing a story about the three-year period from 1875-1878 when seventy-three Plains Indians from various tribes called the fort (known then as Fort Marion) their home. However, since I’m mainly a western and western romance author, all of my story settings to date have been west of the Mississippi—not in Florida. So this interesting historical factoid remained dormant in my imagination for years, waiting for the right opportunity.

That opportunity came last year when I was asked to submit an idea for Barbour’s dual-timeline Doors to the Past series. These stories must be set in or around a major landmark, the plot must focus on a newsworthy event, and there must be a bit of a mystery that connects the historical timeline to the contemporary plot. Obviously, as the oldest masonry fort in the United States, Castillo de San Marcos is an important and interesting landmark. Originally built by the Spanish, it later became a British possession, reverted again to the Spanish, and eventually became part of the United States’ holdings. With such a long and varied history, I’m sure you can see why this unique structure would make an interesting landmark around which to base a story.

The newsworthy event the plot focuses on is the incarceration of those seventy-three Plains Indians, deemed some of the “worst of the worst” offenders in the Indians Wars of the West. Can you imagine the buzz such an event would create? Once the Indians fell into their routine inside the fort, they were given quite a bit of freedom to interact with the locals and tourists. People came from far and wide to see these men and their historic surroundings along the banks of the Matanzas River. With a simple day pass from the fort’s commander, outsiders could enter, walk among and talk with the prisoners, see the historic fort, and even watch cultural events like dances, powwows, mock buffalo hunts, and archery displays. The Native men could also leave the fort and venture into town to shop or sell handmade goods, from bows and arrows to hand-crafted items made from locally-sourced seashells and plants, to their original “ledger art.”

It’s the ledger art that comprises the mysterious puzzle piece connecting the historical timeline of Love’s Fortress to the present day. When Dani Sango learns her long-estranged father has died, she inherits his rundown St. Augustine house. Inside, she discovers a book of Native American art depicting events from one Indian’s daily life. But because her father was a convicted art forger, Dani questions why he would have the strange and rudimentary artwork. She suspects it was his latest scam, so she enlists the help of Brad Osgood, curator of a western art museum in St. Petersburg, Florida, to help her discover where the art originated and how her father came to possess it. In the process, the pair digs deep into the history of the St. Augustine fort and its former residents.

I found it fascinating to research this brief period in the Castillo’s long history, and I hope you’ll enjoy the story that came from my efforts. 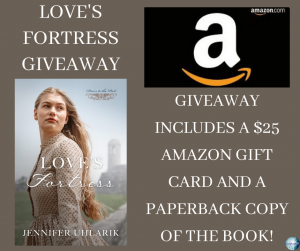 To celebrate her tour, Jennifer is giving away the grand prize package of a $25 Amazon gift card and paperback copy of the book!!