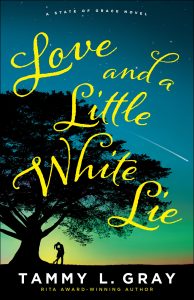 This book is in turn funny and deep. In Love & a Little White Lie, Tammy L. Gray takes readers on an emotional journey along with January because there’s a little of all of us in January.

She doubts herself, God and others in her life but she is also tender-hearted toward people. She’s struggling to find her place after a devastation and puts herself out there. Yes, sometimes her journey is three steps forward, two steps back but no matter her pace, she is moving in the right direction.

Between her wit and her uncanny ability to notice things others don’t, January is a well-rounded, memorable character. But it’s her journey that resonates the most in this beautiful story of love that quietly waits for the recipient to realize it’s always been there.