Shawn Smucker once again delivers his unique fiction that fans, new and old, will inhale and enjoy. 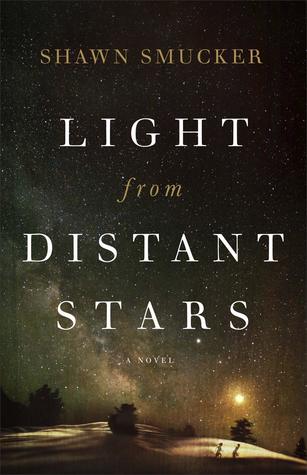 When Cohen Marah steps over his father’s body in the basement embalming room of the family’s funeral home, he has no idea that he is stepping into a labyrinth of memory. As the last one to see his father, Cohen is the primary suspect.

Over the next week, Cohen’s childhood memories come back in living color. The dramatic events that led to his father being asked to leave his pastoral position. The game of baseball that somehow kept them together. And the two children in the forest who became his friends–and enlisted him in a dark and dangerous undertaking. As the lines blur between what was real and what was imaginary, Cohen is faced with the question he’s been avoiding: Did he kill his father?

In Light from Distant Stars, master story weaver Shawn Smucker relays a tale both eerie and enchanting, one that will have you questioning reality and reaching out for what is true, good, and genuine.

If you have yet to read a fiction book from Smucker, get ready for an experience! In Light from Distant Stars, Smucker’s effusive descriptions and eloquent description and prose drive you in yet leave you scratching your head at what, exactly, is going on.

Cohen Marah’s journey between past and present takes a little getting used to, but once it becomes routine, you’re sure to dive into the exploration of relationships—most specifically those of family—and redemption will draw you in. And if that’s not enough, there’s also a small mystery that, instead of a big reveal, is peeled back layer by layer.

Sometimes eerie, sometimes blurring the line between truth and imagination, and once in a while, teeming with hope, Light from Distance Stars is a reading feast of delight from Smucker.