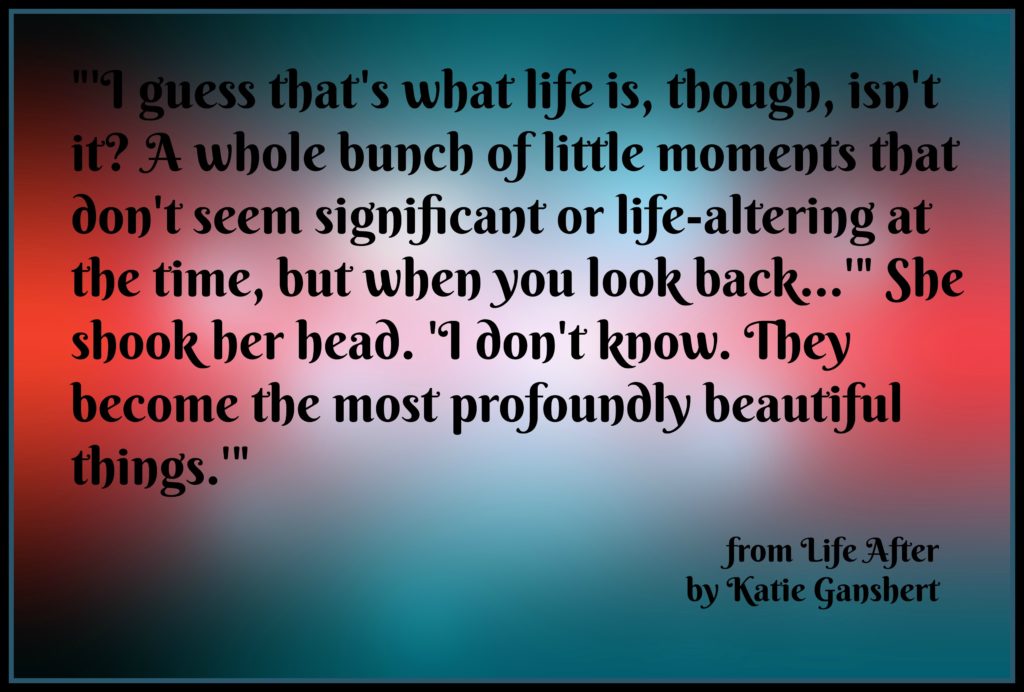 This story. Wow! There is so much I want to say about this book, so many things I want you to know but at the same time, I want readers to experience it for themselves. Katie Ganshert has outdone herself with this one.

After the tragedy on the tracks, life for many Chicagoans is now defined as before and after. As Autumn Manning, the sole survivor grapples with the why of her life, she is haunted by twenty-two ghosts. Ghosts of those who she believes should have lived instead of her.

And then there’s Paul, Reese, and Tate Elliott. A family who lost one member during the attack. But the before is not the same for all of them. Tate doesn’t have many memories of his mom, Reese wants to change hers, and Paul wrestles with the truth behind his marriage.

When Autumn and the Elliotts’ paths cross, there are moments. Moments of laughter, moments of hope, moments when they forget the tragedy and focus on life. As these four try to make sense of the tragedy, to put the before behind them, there is a small glimpse into the future. One that, while loss and grief are a part of life for many, it doesn’t have to be something that defines them.

Another beautiful, poignant story from Katie Ganshert that had me wanting to stay with Autumn and the Elliott family long after the last page, to follow them into what I hope is happiness and joy despite the pain they all have suffered.

More about the book

It could have been me.

Snow whirls around an elevated train platform in Chicago. A distracted woman boards the train, takes her seat, and moments later a fiery explosion rips through the frigid air, tearing the car apart in a horrific attack on the city’s transit system. One life is spared. Twenty-two are lost.

A year later, Autumn Manning can’t remember the day of the bombing and she is tormented by grief—by guilt. Twelve months of the question constantly echoing. Why? Why? Why? Searching for answers, she haunts the lives of the victims, unable to rest.

Paul Elliott lost his wife in the train bombing and wants to let the dead rest in peace, undisturbed and unable to cause more pain for his loved ones. He wants normalcy for his twelve-year-old daughter and young son, to see them move beyond the heartbreak. But when the Elliotts and Autumn are unexpectedly forced together, he fears she’ll bring more wreckage in her wake.