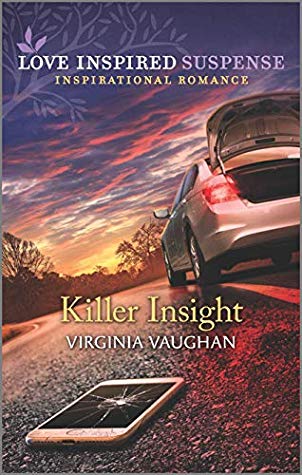 From profiling criminals to being hunted by a killer.

Asking FBI agent Lucy Sanderson to profile the Back Roads Killer is the only way Bryce Tippett can prove his brother is innocent—unless Lucy becomes the next victim. When someone begins stalking her just as she arrives in town, it falls to the single dad to protect her. But as clues lead in unexpected directions, can they uncover the truth…and survive to expose it?

What happens when an FBI profiler doubts her abilities? Killer Insight gives readers plenty to think about—all amid the hunt for a serial killer.

Virginia Vaughan combines action (including gunfire, abductions, bombs, and more) with moments of honesty and introspection into Lucy and Bryce. Bryce’s daughter adds another dimension to this story too.

The twists and turns in the plot had me guessing at the villain then doubting I had it right only to guess at the person behind the crimes again. This was one story I couldn’t put down until all was revealed. The fast paced plot helps it speed by.