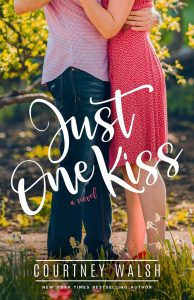 He broke her heart. Now, he’s back, and he’s determined to show her what they had isn’t over. . . and he can prove it with just one kiss.

Single mother Carly Collins likes predictability. However, when her son Jaden’s health is threatened, her neatly controlled world is tossed into a tailspin. Nothing is certain anymore, especially her feelings for Josh Dixon, Jaden’s father, her first love and the man responsible for shattering her heart sixteen years ago.

When Josh Dixon walked out of Harbor Pointe, he left behind his only shot at a real family. Now a successful tech mogul, the town rebel has found a cause—ensure his son’s recovery and prove to Carly and Jaden that he’s not the same guy he was back then.

Carly and Josh are forced to wade through messy emotions and questions that have gone unanswered for years, which would be easier if not for the pesky feelings, every bit as strong and impossible to ignore as they ever were.

Will forgiveness win, giving Carly and Josh a second chance at love . . . or will the past prove too much to overcome?

A small town romance about first love second chances and how our most beautiful life might look nothing like we planned.

Once again, Courtney Walsh takes readers to the small Michigan tourist town of Harbor Point and leaves them both emotionally wrung out and wanting more.

From the moment her mom left, Carly Collins has been the pillar of strength and tenacity people leaned on—her sister, her best friend, and now her son. When sixteen-year-old Jaden is diagnosed with a heart condition that threatens to put an end to his future dreams and her ex returns to town, she’s determined to fortify the wall of protection around her heart.

Josh Dixon has gone above and beyond what anyone in Harbor Pointe expected of the rebellious teenage boy. He’s made a name for himself, built a successful company, and has an impressive bank account balance. Yet, he’s lonely and his biggest regret—leaving Carly and Jaden—haunts him.

Just One Kiss is a story of dreams lost and found again, of the grace and hope found in forgiveness, and of family (the good and the bad). It’s about letting go of the pain of the past to embrace a future beyond your wildest dreams and deepest desires.

This book once again proves that anything written by Walsh is always an excellent choice.