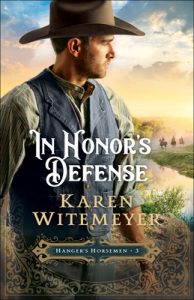 He’s Faced Countless Perils on the Battlefield, but Nothing so Dangerous as Falling in Love.

Luke Davenport has been fighting all his life–for respect, for country, and for those unable to fight for themselves. But now that his Horsemen brothers are domesticated, he’s left alone to battle the wildness within. When an opportunity arises to take a job on his own, tracking down a group of rustlers, he jumps at the chance.

Damaris Baxter has mastered the art of invisibility. Plain and quiet, she hides in books and needlework, content to be overlooked. Until her brother dies suddenly, leaving her custody of her nephew. She moves to Texas to care for Nathaniel, determined to create the family for herself that she never thought she’d have and to give him the family he desperately needs.

When Nate finds himself knee-deep in trouble, Luke’s attempt to protect him leaves Damaris feeling indebted to the Horseman. But suspicions grow regarding the mysterious death of Damaris’s brother. And the more questions they ask, the more danger appears, threatening the family Luke may be unable to live without. 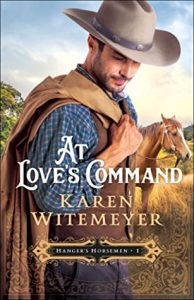 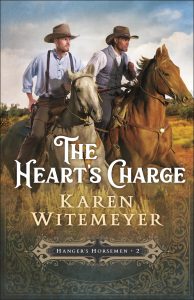 Karen Witemeyer delivers a gift to readers in her new release. In Honor’s Defense rounds out the Hanger’s Horsemen series, and this one was worth the wait.

Luke Davenport is the last unhitched horseman and he’s fine with that but when he meets Damaris and her nephew, his opinions on independence start to shift. Damaris is used to being unseen, but from the moment Luke rescues her, she longs for more than the life she’s been content with.

Witemeyer seamlessly weaves character development, an engaging plot, a touch of humor, and a dollop of faith in her books, and with a character nicknamed “Preach,” you better believe there’s a sermon in there—one that is lived quietly instead of shouted words without proof.

In Honor’s Defense has a couple of the best romantic scenes that I’ve read in a while, and Luke and Damaris are characters I couldn’t help but wish all the best for. This book is the perfect ending to the series.