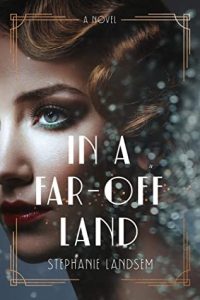 A story about the price of fame, the truth sacrificed on its altar, and the love that brings a prodigal daughter home.
As the Great Depression hits the Midwest, Minerva Sinclaire runs away to Hollywood, determined to make it big and save the family farm. But beauty and moxie don’t pay the bills in Tinseltown, and she’s caught in a downward spiral of poverty, desperation, and compromise. Finally, she’s about to sign with a major studio and make up for it all. Instead, she wakes up next to a dead film star and is on the run for a murder she didn’t commit.

Only two unwilling men―Oscar, a Mexican gardener in danger of deportation, and Max, a too-handsome agent battling his own demons―can help Mina escape corrupt police on the take and the studio big shots trying to frame her. But even her quick thinking and grit can’t protect her from herself. Alone, penniless, and carrying a shameful secret, Mina faces the consequences of the heartbreaking choices that brought her to ruin . . . and just might bring her back to where she belongs.

Stephanie Landsem immerses readers in the glitz, glamour, and underbelly of 1930s Hollywood in In a Far-Off Land.

The first chapter introduces us to Mina, a woman determined to find her place among the stars in Hollywood. She crosses moral lines, justifies her actions, and hunts for notoriety while carrying around the shame and guilt of her decisions. I didn’t always sympathize with Mina, but I did want her to find her way home.

There are definitely some heavy issues happening in this book, which lend to the gritty portrayal of those seeking fame and fortune. But there is also mercy and hope and healing and all of the darkness and hurt and sadness that lead up to it make the ending that much more beautiful.

My favorite character in the book was Mina’s patient and consistent father, and it is not difficult to distinguish the parallels between this story and that of the prodigal son.