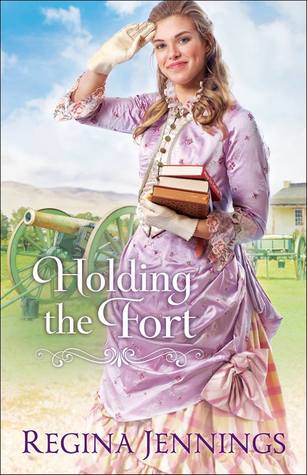 Louisa Bell never wanted to be a dance-hall singer, but dire circumstances force her hand. With a little help from her brother in the cavalry, she’s able to make ends meet, but lately he’s run afoul of his commanding officer, so she undertakes a visit to straighten him out.

Major Daniel Adams has his hands full at Fort Reno. He can barely control his rowdy troops, much less his two adolescent daughters. If Daniel doesn’t find someone respectable to guide his children, his mother-in-law insists she’ll take them.

When Louisa arrives with some reading materials, she’s mistaken for the governess who never appeared. Major Adams is skeptical. She bears little resemblance to his idea of a governess–they’re not supposed to be so blamed pretty–but he’s left without recourse. His mother-in-law must be satisfied, which leaves him turning a blind eye to his unconventional governess’s methods. Louisa’s never faced so important a performance. Can she keep her act together long enough?

When Lovely Lola Bell (aka Louisa Bell) finds herself out of a job, she decides to check on her brother stationed with the cavalry at Fort Reno. While there, she can straighten him out and perhaps find a new job. But when she arrives, she’s mistaken for the governess to Major Daniel Adams’s daughters.

The way Louisa and Daniel meet is both original and a touch humorous. Their second meeting is even better considering neither of them quite knows what to say about that first time.

As Louisa strives to become the teacher to young ladies need, the major’s suspicions about her remain. She’s hiding something, but what?

Miscommunication and misunderstanding run rampant in Holding the Fort. And I snickered and smiled along at the direction Daniel’s jealousy was aimed, knowing the truth.

But more importantly, Regina Jennings dives into the issues of self-worth. Louisa is doing her best to hide her past—her youth, her parents, and her former career—but can’t outrun it. Can Daniel, and the God he follows, make her see that she is precious and loved?