At the end of Reservations for Two, Juliette D’Alisa and her brother Nico had just opened their restaurant. While her professional life fell into place, her personal life fell apart. Her mother was diagnosed with cancer and she and Neil McLaren broke up. Again. This time for good. When her brother’s sous chef admits to taking an interest in her, Juliette turns to him for comfort. 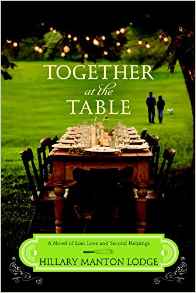 Together at the Table, the final installment in the Two Blue Doors series, finds Juliette and her siblings mourning the loss of their mother and dreaming of Neil and their time spent together, regretting the way they ended. Since the restaurant’s success keeps Juliette’s hands and mind busy, she throws herself into work, telling herself she’ll focus on other things later. When a trip to the waterfront brings her across the man in her dreams, Juliette isn’t sure how to proceed.

I love Juliette and the D’Alisa family. They are a tight-knit group who look out for each other. Juliette and her sister Cat’s relationship is a close one, one in which, despite the miles between them, they can share everything with each other. Adrien is a good guy—but not the guy I was rooting for in Juliette’s future.

Six months after her breakup with Neil, neither of them is the same person they were before. Both have grown. Both know a little better what they want in their lives (although Juliette still struggles with what she wants to do with her future). And as they spend a little time together and start talking again, they try and find footing as friends.

Juliette’s search for her missing family through her grandmother’s letters also continues and readers learn the truth about the missing Alice (Juliette’s mother’s twin sister who none of them knew about). The entire story is unraveled in the second half of Together at the Table.

Overall, a happy ending for Juliette and the D’Alisa family despite the heartaches that life brings along. Oh, and I can’t forget to mention the amazing recipes sprinkled throughout the book. Reading this one definitely made me hungry at times.

***Blogging for Books and Multnomah Publishing provided me with a complimentary copy of this book in exchange for an honest and fair review. All opinions expressed are my own.