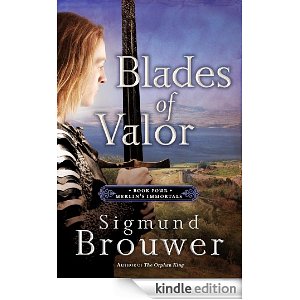 A couple of years ago I reviewed the second book in the Merlin’s Immortal series written by Sigmond Brouwer. Since then I’ve been interested in how the story develops and also reviewed the third book in the series and now, with the release of the fourth, and final, book, Blades of Valor I felt the need to see how the series ended since I have grown to know these characters over the past couple of years.

In book three, Thomas of Magnus and Katherine ended up in the Holy Land looking for answers. Book four picks up right where book three ended. Katherine and Thomas have found Sir Williams and are looking for a treasure they believe to be hidden somewhere in the Holy Land. However, Thomas is still struggling to figure out who he can trust. His heart wants to trust Katherine, the beautiful girl that he can’t think straight around, but he feels she has betrayed him when he sees her enter a city with men who tried to assassinate him. Thomas must use his knowledge to figure out whether to trust Sir William and Katherine or Sir Baldwin instead. Meanwhile, back in England, a conspiracy brews that could destroy the kingdom.

This is a great series for teenage boys with fighting, sword play and the mystery of what Thomas possesses that is sought after by evil men. Brouwer did a great job of wrapping up the series and giving readers closure to the story of Thomas of Magnus.

****Waterbrook/Multnomah Publishing provided me with a free eBook in exchange for an honest and fair review. I was not compensated in any way for either a positive or a negative review.