Grace Hitchcock wraps up her American Royalty series with a take on The Phantom of the Opera in His Delightful Lady Delia. 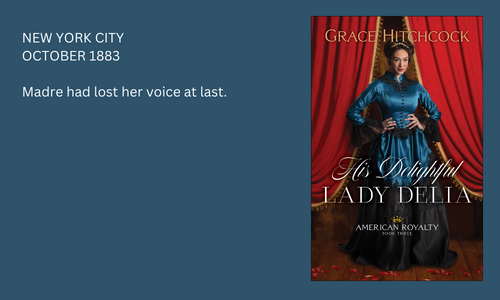 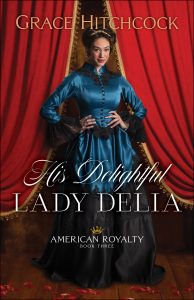 Behind the curtain, she must put on the performance of a lifetime . . . while love and risk take center stage.

Delia Vittoria’s mother has lost her voice at last. After five years of being her diva mother’s understudy, it is time for Delia to assume her place as the lead soprano onstage behind the Academy of Music’s faded velvet curtain. And she is all that stands between the Academy and its greatest threat–the nouveaux riches’ lavish new Metropolitan Opera House.

Kit Quincy never misses opening night, but when his sister begs him to help get her husband out of an Italian opera star’s arms, Kit accidentally confronts the younger Lady Vittoria instead. When he meets the stunning young diva again, he attempts to make amends, but then finds himself pulled into a society matron’s plot to win the great opera war. To draw attention to Delia Vittoria as the Academy’s new soprano star, Kit is convinced to act as both Delia’s patron and the enigmatic phantom who once haunted the Academy years ago. But when a second phantom appears, more than Delia’s rising career is threatened.