Happy Friday, reader friends! My plans for cranking some reading out while on vacation were hit and miss. On travel days, I had no problem keeping my nose in a book. On the other days, there was almost too much going on around me to really concentrate. As my brother-in-law was making the food for his daughter’s wedding, he had his music cranked. Even when I went upstairs, it was loud (but not too loud to put earphones in and listen to an audiobook until he finished up in the kitchen).

This week, I’m sharing the line from Michelle Griep’s Christmas book. Well, Christmas, historical fiction, ode to Dickens. So much packed into this little story!! 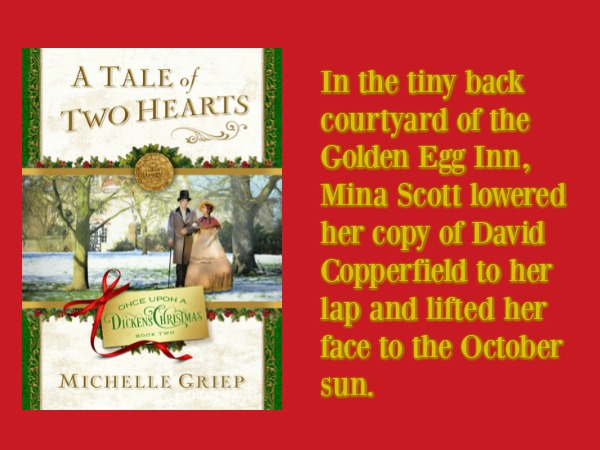 London, 1853: Innkeeper’s daughter Mina Scott will do anything to escape the drudgery of her life, for there’s nothing more mundane than serving customers day after day. Every minute she can, she reads and dreams of someday becoming a real lady—and catch the eye of William Barlow, a frequent guest at the inn.

William is a gentleman’s son, a charming but penniless rogue. However, his bachelor uncle will soon name an heir—either him or his scheming cousin. In an effort to secure the inheritance, William gives his uncle the impression he’s married, which works until he’s invited to bring his wife for a visit.

William asks Mina to be his pretend bride, only until his uncle names an heir on Christmas Day. Mina is flattered and frustrated by the offer, for she wants a true relationship with William. Yet, she agrees. . .then wishes she hadn’t. So does William. Deceiving the old man breaks both their hearts. When the truth is finally discovered, more than just money is lost.

Can two hearts survive such deception?

What are you reading this weekend?

Grab the book nearest you and drop the first line in the comments. Then head over to our hosts at Hoarding Books and check out what others are sharing this week.