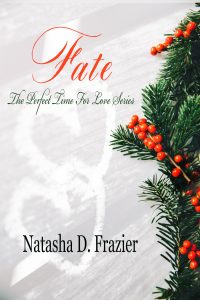 Melanie Bennett and Detective Brian Morris met over a year ago when he solved her best friend’s murder case, and now Nashville’s annual Christmas festivities have them crossing paths again, could it be fate?

Melanie Bennett has spent the last six months in therapy to erase the self-assigned blame and eradicate the night terrors that plagued her at every attempt to close her eyes after witnessing her best friend’s murder. The Christmas season always had a way of lifting her spirits, and this year is no different. The spark within her to live again couldn’t have come at a better time when she and Detective Brian Morris are reacquainted, but first, she must believe that she deserves happiness.

Will the circumstances of how they met prevent Melanie from taking a chance on love?

Brian was drawn to Melanie when he first laid eyes on her over a year ago; he wanted to ask her out, but the timing was all wrong. Expressing interest in her when she’d just lost her best friend was tacky, but fate dealt him another opportunity when he walked into her hair salon delivering flyers for the annual stuff the cruiser toy drive a year later. Though Brian desires love, will his unresolved issues with his mother get in the way?

Every moment spent with one another can only be described as fate – a power beyond human control. Will this Christmas season bring about the healing and love both Melanie and Brian crave?

If you’re looking for a quick and sweet romance with a strong faith thread, add Fate by Natasha D. Frazier to your list of options.

Melanie first met Brian while going through a trauma. Now, months later, they cross paths again and decide to see where their attraction leads. Brian is upfront with how he feels about Melanie, and she (mostly) responds in kind.

While this story is someone formulaic (as problems arise, they are quickly worked through and solved), I did want to keep reading until this couple found their happily ever after. Frazier gives readers an uplifting, hope-filled read.