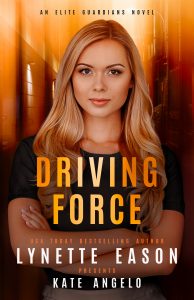 He’s the last client she wants to protect…

Elite Guardians bodyguard/former sniper CHRISTINA SHERMAN has protected uncooperative clients before—but this time, well her client is bossy, headstrong and occasionally eats off the floor. Yes, he’s a highly trained military working dog, but certainly her skills could be put to better use, right?

Not according to former Special Forces Air Commando GREY PARKER. He needs her help to protect his dog while he undergoes an experimental surgery that could restore his ability to walk. He just needs someone to keep his canine partner safe. Most of all, Grey wants back on his feet so he can track down a deranged scientist known as The Scavenger who unleashed a nerve agent that left Grey sidelined in a wheelchair.

When an attempt is made on Grey’s life, and dead bodies begin piling up—with evidence the same toxin is responsible—suddenly Christina is tasked with keeping both dog and soldier alive…and with them, the secrets that could stop a terrorist attack.

But this time, even Christina might be in over her head.

Dive into the exciting ignition to the Elite Guardians Collection.

At a writers’ conference this week I learned that romantic suspense with strong female leads are what is selling right now, and Lynette Eason has delivered on all accounts for years. Driving Force written by Eason and Kate Angelo team up to return us to a reader-favorite series: The Elite Guardians.

Christina’s military background makes her the perfect candidate to protect Grey’s dog. And from the first chapter of this book, the author clue readers in that things aren’t going to be as simple as all that. There was definite connection between Christina and Grey from their first meeting, but also some missteps on both their parts.

There is a good balance of intense scenes throughout the book along with those of getting to know the characters. And Boss steals the show every time he shows up.

And while I guessed the culprit early on and my suspicions never strayed from that person, the journey to uncover whether or not my assumption was right kept me turning those pages. I’m looking forward to what comes next in this series.