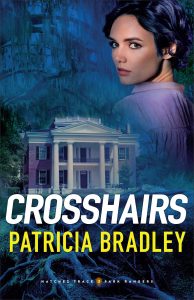 Investigative Services Branch (ISB) ranger Ainsley Beaumont arrives in her hometown of Natchez, Mississippi, to investigate the murder of a three-month-pregnant teenager. While she wishes the visit was under better circumstances, she never imagined that she would become the killer’s next target–nor that she’d have to work alongside an old flame.

After he almost killed a child, former FBI sniper Lincoln Steele couldn’t bring himself to fire a gun, which had deadly and unforeseen consequences for his best friend. Crushed beneath a load of guilt, Linc is working at Melrose Estate as an interpretive ranger. But as danger closes in on Ainsley during her murder investigation, Linc will have to find the courage to protect her. The only question is, will it be too little, too late? 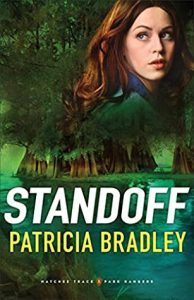 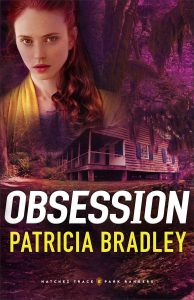 Crosshairs by Patricia Bradley brings readers back to Mississippi and the end (or the beginning depending on where you start) of the Natchez Trace with missing journals, a murder investigation and plenty of suspects.

I have a soft spot for second chance romances, and Ainsley and Lincoln deserve theirs after fifteen years apart. There are plenty of hurdles to climb over, under or through and lots of danger on top of that.

Because of the multiple story arcs happening in this book, it’s one you have to pay close attention to, but the chapters are short, all of the characters—include the supporting cast—are well-developed, and you won’t want to put the book down, anyway.

While there one character from a previous book makes some appearances and a few others are mentioned, they are not integral to Crosshairs, so you won’t be missing out if you start with book three in the series. Although, you’re missing out if you don’t go back and visit them to learn more about the park rangers the series is names for and the unique setting.