Beth Vogt is a fairly new-to-me author. I actually discovered her in last year’s wedding novella series. When I find an author I enjoy, I want to read everything that author has written and then I anxiously await for new books by them. So, I’m thrilled Beth’s got a new series starting this month (first book will be released on June 30). But, guess what? You actually don’t have to wait until June 30 to read something in this series. Whet your appetite with the novella Can’t Buy Me Love (available now for 99 cents). 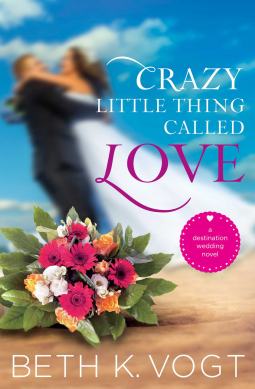 Vanessa Hollister is getting married. Again. Her fiancé, an ER doctor, hopes to combine their honeymoon with a medical conference and suggest Vanessa travel to Destin, Florida to set things up. The problem? Destin holds a lot of memories for Vanessa. It’s where she hung out with her first love who became her first husband. A man she’s spent the past eight years forgetting. A man whose job was more important to him than their marriage. A man she hoped would come after her but never did. So, with the goal of preparing for her wedding and forgetting everything she can about Logan Hollister, Vanessa goes to Destin. And her life his hit by more than one hurricane while she’s there.

If you follow Vogt on Facebook or Pinterest, you know she asked her readers to help her choose a lot of items that went into her books. It’s kind of fun to see how they stories have turned out. In Crazy Little Thing Called Love, she weaves Logan’s and Vanessa’s history with their current day lives (and how cute is it that they had the same last name when they met). Vanessa’s fear of immersing herself in lasting relationships because of her upbring. Living in a military family meant moving every few year or so and never forming life-long ties. Logan’s desire to chase his dream job meant letting go of the best thing in his life, his wife. And he has regretted that every day for eight years. Now that he is rethinking his career, is it providence he has run into Vanessa again? Both members of this marriage failed to communicate with the other when they were young and inexperienced. Both were hurt. Now it’s time to forgive and move on.

***Howard Books provided me with a complimentary copy of this book via NetGalley in exchange for an honest and fair review. All opinions expressed are my own.