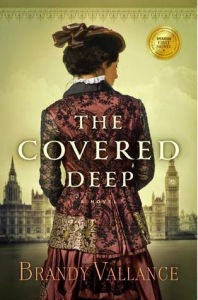 Bianca Marshal feels trapped. Her twenty fifth birthday is around the corner and, according to the book she is reading, her prospects of marriage are about to decrease thirty four percent. With that weighing on her mind, when Bianca’s father shows her an advertisement for contest that will include a trip out of Ohio and across an ocean to London and then on to the Holy Land, she decides to enter. When Bianca arrives in London, she meets Paul Emerson, a local historian, and is immediately captivated by him. Emerson feels the same way about Bianca but some mistakes from his past keep dragging him down and making him believe he’s not worthy of Bianca–the perfect woman for him. Adrian Hartwith has chosen his travel companions carefully for his own dangerous game. How much will they endure until their faith is shaken? Will Paul Emerson’s faith crumble when he loses the one thing he desires most but can’t have?

Brandy Vallance’s debut novel is intriguing and the concept is an interest twist. Filled with adventure, danger, romance, and hope, The Covered Deep keeps the reader immersed in the story. Bianca is naïve but likeable and there are some laugh-out-loud moments in the book. There are also some heart-wrenching moments and still others where you want to wring someone’s neck. The ending felt somewhat rushed as I would have liked to hear what became of a couple of the other characters we’d traveled with throughout the book (what happened to Adrian Hartwith? Did he have a change of heart? Is he still playing with people’s emotions and lives?) and more about Bianca’s change of heart toward Paul at the end, but overall, the story was worth the read.

***Worthy publishing provided me with a free copy of this book in exchange for an honest and fair review.