I’m a fairly new reader to the whole cowboy romance genre, but man is it popular. In truth, I never have had the desire to be a part of ranch life and most of the real-life cowboys I’ve known don’t exactly inspire awe (both in personality and in looks). And I’ve been around a few after growing up in Wyoming and attending college not too far (comparatively speaking) from where Ruth Logan Herne’s Back in the Saddle is set (just across the Washington state border in Idaho). 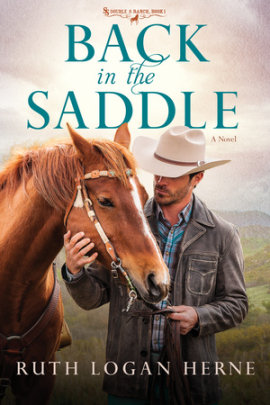 This book is a modern day retelling of the parable of the prodigal son. Herne even mentions it several times in the book. When Colt Stafford returns home to his family’s ranch in central Washington, he’s surprised to find his father’s health failing but even more surprised to learn of his father’s new found faith. The other surprise is his father’s beautiful but bossy caregiver and cook.

It is apparent from the beginning of the book that Colt is a good guy. He’s kind to everyone around him, has a bond with the ranch hands, and children gravitate toward him. When he left home, he had no intention of every returning to Washington but hard times and a horrible financial market have not only forced him out of a job but also tied up all of his funds.

Angelina Morales is a Latin spitfire who speaks her mind and takes no guff from the cowboys around her. Her background makes her smart, intuitive, and ready to go toe-to-toe with anyone. And all of the supporting characters are a lot of fun.

Both Angelina and Colt tend to get hung up by their past lives and instead of looking forward to what the future might bring them, they dwell on what history has proven to them. The chemistry between the two main characters is evident early on but could have been explored more deeply.

But my biggest objection to the book is that Angelina never once questioned whether or not getting involved with a man who had no faith in God was a bad choice for her. Her faith is her hope yet the only objection she has to a relationship with Colt is that he’s a financial, business type (much like the man who hurt her in the past). And by the end of the book, there was not definite conversion to Christianity for Colt. He started to wonder if God had directed him home but he never made a solid commitment to faith.

Over all, a quick read which is heavy on the romance and family aspect and light on the faith one. Available for purchase March 15, 2016.

***Blogging for Books provided me with a complimentary copy of this book in exchange for an honest and fair review. All opinions expressed are my own.