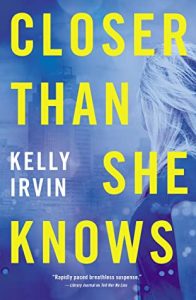 A serial killer bent on revenge . . . and striking too close to home.

Teagan O’Rourke has always loved murder mysteries. In her job as a court reporter, she has written official records for dozens of real-life murders. She’s slapped evidence stickers on crime scene photos. She’s listened to hours of chilling testimony. But she’s never known the smell of death. And she never thought she might be a victim.

A young police officer is murdered just inches away from her, and then a man calling himself a serial killer starts leaving Teagan notes, signing each with the name of a different murderer from her favorite mystery novels.

Panicked, Teagan turns to her friend Max Kennedy. Max longs for more than friendship with Teagan, but he fears she’ll never trust someone with a past like his. He wonders how much of God’s “tough love” he can take before he gives up on love completely. And he wonders if he’ll be able to keep Teagan alive long enough to find out.

As Teagan, Max, and Teagan’s police officer father race to track down the elusive killer, they each know they could be the next victim. Desperate to save those she loves, Teagan battles fears that once haunted her in childhood. Nothing seems to stop this obsessed murderer. No matter what she does, he seems to be getting closer . . .

Teagan’s career as a court report gives her an inside look at the evil and horrors humans can commit. When she and her friends and family become targets of a serial killer, she often views the situation through the lens of her job. And since the rest of her family are law enforcement, she gets plenty of opinions.

By far, my favorite character in this book is Max. He’s made some mistakes in his past and is trying to let them go but he’s human and falters sometimes. His affection for Teagan is obvious as is his hesitancy to push for more than their friendship.

While the suspense is ratcheted up with each new discovery and a few red herrings are thrown at the reader, I figured out who the culprit was early on and his motivation became clear upon meeting a certain character.

I’ve watched Kelly Irvin’s growth as a suspense writer over the past few books, and Closer Than She Knows raises that bar a little higher.