There was a teaser for The Proposal at the end of book one in this series, so I’ve been awaiting this one for a while. 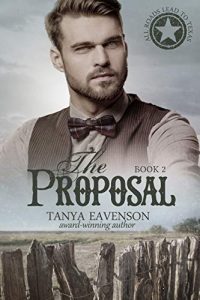 When the sheriff’s daughter goes into hiding from her father’s killer, her life isn’t the only thing in danger.

The day Jessica Thompson’s father was murdered, she swore to never love another sheriff. Now, she’s fleeing his killer. When her stagecoach is robbed and her rescuer declares she will be his wife, she does the only thing she knows to do—shove her revolver in his back. Never would she have expected he wore a star on his chest.

Sheriff Blake McKenny prides himself on protecting his town’s people from danger,
but his efforts don’t include a headstrong woman bent on putting herself in harm’s way. When outlaws threaten his town and put Jessica’s life in danger, Blake’s failure to save his late wife haunts him.

Can Jessica and Blake forgive themselves for the past and break down the protective walls around their hearts? Or will secrets and deception take their lives in a direction they never saw coming?