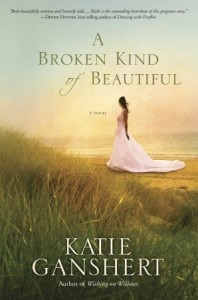 As a reader, once in a while I run across a book that I know will remain on my bookshelf for additional reads. A Broken Kind of Beautiful by Katie Ganshert is exactly one of those books that will stick around for years and will be high on my recommendations list when people are looking for good reads. This book was tragic and haunting while hopeful and beautiful.

Twenty-four-year-old model Ivy Clark does not want her career to end, but that seems to be exactly what is happening. After ten years in the modeling industry, the only job Ivy can get is modeling wedding gowns for her stepmother’s store in Greenbriar, South Carolina. Ivy knows she’s beautiful, but that doesn’t seem to matter in Greenbriar like it did in New York City. Davis Knight left a successful career in fashion photography after a tragic accident and vowed never to pick up his camera again. When his aunt asks him to pick it up to help with her store and take pictures of Ivy Clark, he is torn. He sees something in Ivy beyond her beauty, he sees the brokenness that lies beneath.

While I was reading this book, I would go back and forth from wanting to shake Ivy and tell her to get out of her pity party and look around her to wanting to hug her and make everything better. The same thing happened with Davis, I would get annoyed at him at one point in the book, but then he would do something made everything better. Ganshert’s characters were real and raw with pasts, hurts, and misconceptions. That just endeared them to me even more. This was the first book I’ve read by Ganshert, but I’ll be adding her others to my reading list after this one.

****WaterBrook Multnomah provided me with a free copy of this book in exchange for an honest and fair review. I was not compensated in any way for either a negative or a positive review.