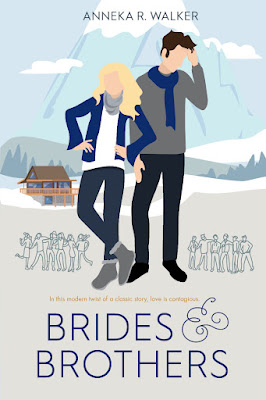 A modern retelling of Seven Brides for Seven Brothers.

Camille Kelly is in real danger of becoming an old maid—at least by Cherish, Montana, standards. She has all but given up on finding Mr. Right—until her broken laptop leads her to Aiden Peterson, a tall, dark, and handsome computer genius. Camille would never have believed her magic moment was right around the corner, but after two whirlwind weeks, she has a ring on her finger and has happily ever after in sight. However, she soon discovers Aiden is part of a daunting package deal . . .

As the eldest of seven brothers, Aiden has never had a problem living under the same roof as his rambunctious siblings. When he falls for Camille, he is confident she’ll fit right into his family’s already bursting home. He thought wrong. Aiden and Camille’s storybook romance comes to a screeching halt when she discovers her new living situation. Not willing to submit to a life mothering a bunch of grown men, Camille has only one option: she embarks on a campaign to improve her new brothers-in-law and marry them off. And what better candidates for wives than her own best friends?

No one should underestimate the influence of a woman. If Aiden Peterson had realized this a few years ago, it would’ve saved him a lot of grief in his efforts to parent his six younger brothers. Lost in his thoughts, Aiden leaned against the marble countertop in his kitchen while he waited for his dinner to finish cooking. It had been a week since he’d said goodbye at the airport to his baby brother, Grant, who had deployed to Iraq. Watching Grant hug his girlfriend, the woman who’d turned him into a well-behaved man almost overnight, had reminded Aiden of a promise he’d made ten years ago at his parents’ graveside—one he intended to keep.

The timer went off, and Aiden pulled the pan of fish sticks and fries out of the oven. He grimaced when he accidentally dropped the hot pad onto the heating element. Instantly, a corner of fabric disappeared in a small flame. He grabbed a spatula, scooped the burning hot pad onto the floor, and deftly pounded out the flames.

It didn’t bode well if thoughts of dating again had distracted him to the point of nearly burning down his house. While he loved living in a bachelor pad with his brothers, a guy could only live off frozen food for so many years before he cracked. If getting married could change this, dating might be worth it. With a sigh of disgust, he rinsed the charred hot pad under water. He let it drip dry before he opened the drawer next to the oven and threw it in.

“I saw that.” Benson drawled from the other side of the room. Aiden glanced at his brother just thirteen months younger than him, sitting in the family room just off the kitchen. He wished Benson didn’t have an inch on him in height and a broader chest. It had been so much easier to tell his brothers to mind their own business when they were smaller. “When are you going to learn how to cook?” Benson asked him.

“No need when I have you around,” Aiden said. Benson was the only one of the Peterson brothers who knew how to cook, and his meals consisted of potatoes and potatoes.

“What if I get married and leave?”

Aiden’s brow rose. It was ironic how casually Benson had brought up marriage, the topic that kept ringing in his own mind. “You have to learn how to talk to girls before you can get married.”

Benson had a lot going for him, but he was reserved and antisocial. He needed a woman to pull him out of his shell. In fact, all his brothers could benefit from the influence of a woman—a person who could bring light back into their lives, like Amy had done for Grant.

Benson picked at his teeth with a toothpick. “There isn’t a need to talk to girls. They talk enough for everyone.”

Benson’s hang-up with dating was part of the Peterson plague. They’d had to be independent and emotionally guarded for so long, but it didn’t have to be like that anymore. Once Aiden married, the pattern would cycle right down the alphabet. Next would be Benson, then the twins, Cade and Daegan, then Flynn, Easton, and Grant. In fact, Aiden didn’t see why he couldn’t get the older five married before Grant’s deployment ended in a year’s time.

No one else was home, so this was Aiden’s opening to confess his thoughts and gauge Benson’s reaction. “We can work on the talking-to-girls thing. I want you to start dating.” He had Benson’s full attention now. Aiden juggled a hot fish stick back and forth between his hands before setting it back down in the pan with resolve. “Seeing Grant and Amy together got me thinking about Mom and Dad. After the crash, I vowed I’d get us all married and settled down. More than anything, they wanted us to find happiness with our own families. It’s been ten years. It’s time.” 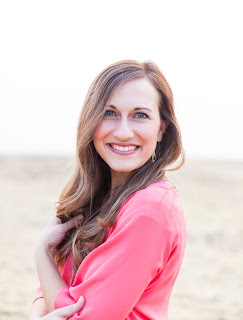 Anneka Walker is an award-winning author raised by a librarian and an English teacher turned judge. After being fed a steady diet of books, she decided to learn about writing. The result was a bachelor’s degree in English and history. When she isn’t dreaming up a happy ending for a story, she is busy living her own with her husband and adorable children.