As a reader, the Rufus/Theo conversations could have gotten confusing, but I never felt lost in who I was reading about. It takes a while before Grace and the new preacher meet but it also built good backstory so I truly understood who Theo was before arriving in Grace’s town (and what made me like him despite deceiving everyone). My biggest complaint was that I would have liked an epilogue—to get a peek into Grace and Theo’s future. But overall, an enjoyable read, as always, from Kim Vogel Sawyer.

More about the Book 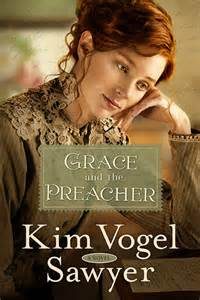 At the age of twenty-three, postmistress Grace Cristler has all but given up hope of finding a husband among the narrowing group of eligible men in her town of Fairland, Kansas. But when her uncle decides to retire from the pulpit, Grace is responsible for corresponding with the new preacher set to take his place. She can’t deny the affection growing in her heart for Reverend Rufus Dille—a man she deeply admires but has only met through his letters.

Theophil Garrison is on the run from his past. Ten years ago his outlaw cousins convinced him to take part in a train robbery, but Theo fled the scene, leaving his cousins to face imprisonment. Now they’ve finished their sentences, but the plan for vengeance has just begun. Branded a coward and running for his life, Theo has aa chance encounter that could provide him with the escape he needs.

But the young man’s desperate con might come at an enormous price for the tenderhearted Grace—and the entire town. Will Grace’s undeserved affection and God’s mercy make something beautiful from the ashes of Theo’s past?