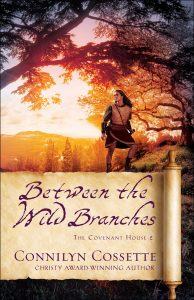 Ten years ago Lukio fled Kiryat-Yearim, where he’d been adopted by the Levite family who guarded the Ark of the Covenant. Feeling betrayed by everyone, he returned to his birthplace in Philistia to become a famous fighter. Now the champion of Ashdod, Lukio has achieved every goal with the help of his ruthless cousin. But just as he is set to claim the biggest prize of all, the daughter of the king, his past collides with his present in the form of Shoshana.

After a heartbreaking end to her secret friendship with Lukio, Shoshana thought to never see the boy with the dual-colored eyes and the troubled soul again. But when she is captured in a Philistine raid and enslaved in Ashdod, she is surprised to find that the brutal fighter known as Demon-Eyes is Lukio himself.

With explosive secrets and unbreakable vows standing between them, finding a way to freedom for both may cost them everything. 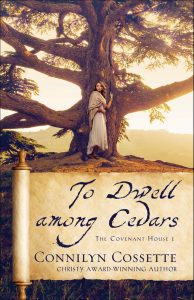 At the end of To Dwell Among Cedars, a heartbroken Lokio flees to who knows where. But Connilyn Cossette doesn’t leave him to wander. In Between the Wild Branches, readers catch up with Lokio a decade later in Ashod.

Lokio and Shoshana have faced heartbreak, and while Lokio now is a champion among the Philistines, he’s not content. Then Shoshana enters his life again (and the most inopportune time) and the two of them face deep rooted longings and impossible odds.

While I wasn’t a fan of the love triangle at first, Cossette writes and resolves it well. And the beauty of this book is in Lokio’s redemption and forgiveness of those wrongs he’s perceived throughout his life.

The ending is made more beautiful with the difficult journey these characters travel.