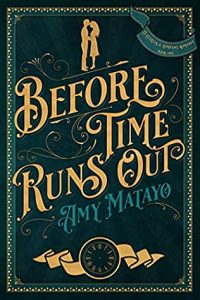 Graduate student Bree Sanders is failing the one class she needs to get her degree. So when her professor gives her an ultimatum—ace her thesis or risk having to repeat her final semester—she knows she has to pull out all the stops. After scrambling for an idea, she decides to create her own Ghost Club, a club that blames ghosts for unsolved crimes, the same type of club originally founded two centuries ago by Charles Dickens.

What she doesn’t expect is to find an original copy of one of Dickens’ early works, or to be transplanted into Dickens’s actual ghost club meeting, circa 1870, the instant she picks it up.

When Bree shows up in nineteenth-century England wearing cut-offs and an old t-shirt, her only option is to hide. The Cambridge of 1870 won’t look kindly on a woman dressed like her. So, when Theodore Keyes finds her tucked behind a bookcase at the Trinity College library and immediately demands to know where she came from, she knows he doesn’t belong here either. Turns out she’s right; the same book caused him to time-travel from 1947 almost three months ago and he’s been stuck in England since.

Together, the two vow to work side-by-side in their search for the lost book that will take them home. But as their feelings for one another deepen, Theo and Bree are caught between a desire to return to the lives they each left behind, and the knowledge that if they find the book, they won’t be able to leave together.

I love when authors take a step of faith and try something new, and Amy Matayo hits a home run with Before Time Runs Out. This time travel romance smoothly combines three time periods and plenty of Charles Dickens lore.

While we get a lot more about Bree at the beginning of the book (there are several chapters of set up before the actual time travel), this book would not be the same without Theo. These two are from two different worlds but carry similar guilt and pain. It’s both amusing and a little heart breaking (because how are they both going to get a satisfying ending when they are half a century removed from each other in real life?) when they are together.

With some unexpected twists and turns, and the increased tension in the last third of the book, I found myself already wanting more. It’s a good thing this is the first in a series because I look forward to where Matayo takes us next.