Around February of this year, several authors shared they were reading this book and raving about it, so it quickly landed on my TBR list. Now it’s here and I have to say while it wasn’t quite what I was expecting, it was a wonderful story of C. S. Lewis and the woman he loved (who I knew very little about previous to this read). 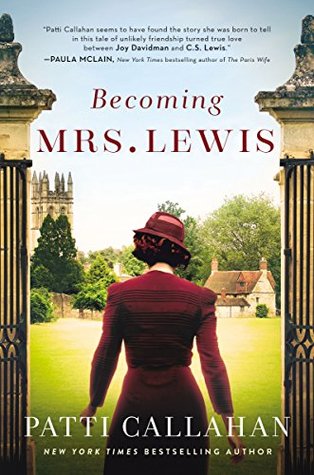 In a most improbable friendship, she found love. In a world where women were silenced, she found her voice.

From New York Times bestselling author Patti Callahan comes an exquisite novel of Joy Davidman, the woman C. S. Lewis called “my whole world.” When poet and writer Joy Davidman began writing letters to C. S. Lewis—known as Jack—she was looking for spiritual answers, not love. Love, after all, wasn’t holding together her crumbling marriage. Everything about New Yorker Joy seemed ill-matched for an Oxford don and the beloved writer of Narnia, yet their minds bonded over their letters. Embarking on the adventure of her life, Joy traveled from America to England and back again, facing heartbreak and poverty, discovering friendship and faith, and against all odds, finding a love that even the threat of death couldn’t destroy.

In this masterful exploration of one of the greatest love stories of modern times, we meet a brilliant writer, a fiercely independent mother, and a passionate woman who changed the life of this respected author and inspired books that still enchant us and change us. Joy lived at a time when women weren’t meant to have a voice—and yet her love for Jack gave them both voices they didn’t know they had.

At once a fascinating historical novel and a glimpse into a writer’s life, Becoming Mrs. Lewis is above all a love story—a love of literature and ideas and a love between a husband and wife that, in the end, was not impossible at all.

There is probably no Christian author as well-known and loved as the creator of a magical land called Narnia and a lion named Aslan. C. S. Lewis’ work has lasted through the years and influenced many a Christian. Yet, Patti Callahan proves that, perhaps, we will never fully know everything about this man whose friends called him Jack.

Toted as “The Improbable Love Story of Joy Davidman and C. S. Lewis,” Becoming Mrs. Lewis is ninety-five percent Joy’s story. A woman who was born Jewish, converted to atheism and later communism, much like Lewis, Joy came to Christ later in her life (in part due to a couple of Lewis’ books). Trapped in a marriage with an alcoholic, unfaithful, and later, abusive husband, Joy fights to love the man she married. To be content with her life for herself and her boys. 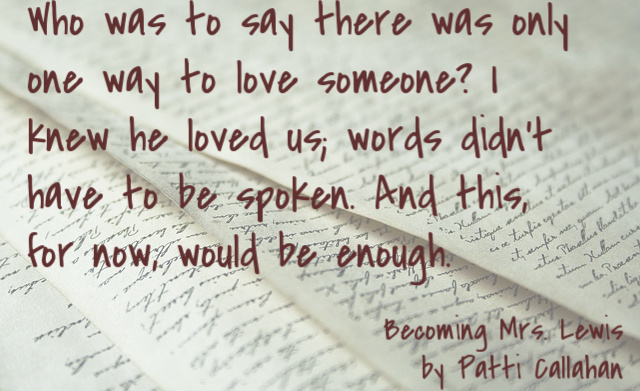 When she begins corresponding with Lewis (who invited her to call him Jack) through letters, she finds a place to share her life. From the mundane to the struggles and trials of her marriage and faith, the letters between them flowed. Monetary issues, a crumbing marriage, and recurring health issues test Joy’s faith, and she savors and cherishes each of Jack’s letters. Later, she visits England and falls in love with the country.

Callahan’s beautiful portrayal of Joy and Jack presents readers with a story not easily forgotten. Despite Lewis’ popularity and revered writings, the man was human with faults and vices we often overlook or ignore (or maybe didn’t even know about). The author does justice to Joy Davidman who greatly influenced many of Lewis’ later works.

Readers are swept away to the majesty of England, from the countryside to the kilns to the pubs where writers groups like Lewis’ Inklings gathered. This book wasn’t quite what I was expecting, it was so much more.

Content warning: Because this is a Thomas Nelson publication, readers should be warned there are a couple swear words and several references to sex in this book as Joy became a Christian after many worldly experiences and her life is shaped by those.